Following a Flair for Creation

I confess I'm not a prolific blog reader, but I enjoy learning how other authors feel about their writing. What it usually boils down to is they see placing words on paper (or a computer screen) as part of their makeup. They have to write. My take on it may be basically the same, but I see it in a little different light.

I look at writing as one way to indulge a talent for creation. Creative types love to produce something out of nothing, to follow the old Star Trek manta of going where no man has gone before. I've always enjoyed the creative process. Back in the sixties I put together all the parts to create Nashville's first slick paper monthly magazine. I followed that with a venture into the advertising world, joining the creative department of Nashville's largest agency.

During the final segment of my life in the business world, I managed a statewide trade association of more than 4,000 members. One of the most fun parts of the job was to create annual conventions with openings that would excite the delegates. I put on a variety of productions using video and music, including one with a young female news reporter staging a TV newscast. 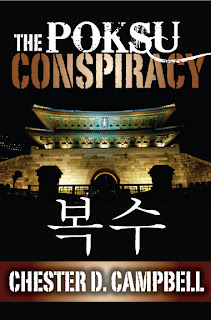 When I set up shop in my home office after retirement, I turned to novel writing as a natural outlet for my creative penchant. The first seven manuscripts I completed got varied receptions from a string of agents, none resulting in publication, but I kept at it because I enjoyed creating the tales of adventure. I finally got a contract and began to produce stories that wound up on the printed page. And as the publishing world changed, they began to appear in the electronic arena.

The first three manuscripts were a trilogy of political thrillers written twenty years ago. I've been working to revise them more in today's style, meaning tighter and somewhat less wordy. The first volume, Beware the Jabberwock, is now on Amazon, and book two, The Poksu Conspiracy, will be there by the end of this month. The new cover is shown at right, featuring South Korea's National Treasure No. 1, the Great South Gate (Namdaemun), above the hangul characters for poksu, meaning "vengeance."

I consider myself primarily a storyteller. I have no desire to write books with messages intended to sway readers' minds in some direction. I keep writing because I enjoy creating stories that interest me and hopefully will interest a few of those millions of novel readers out there. If you are one of them, tell your friends.

Posted by Chester Campbell at 12:40 PM