The Plot's Boiling for Greg McKenzie

One question readers are forever asking is where do your ideas for books come from? I've tackled it a few times in blogs, where I discussed various novels from the past. But I thought I'd bring the subject up to date with a look at where my newest creation is coming from.

I've spent the past couple of months working on revisions of the first two manuscripts I turned out back in the early nineties with the intent of publishing them as ebooks if nothing else. Now it's time to get back to my bread-and-butter series starring that indefatigable former Air Force OSI agent, Greg McKenzie. I decided to hit a couple of new points about his background that hadn't been explored before.

We learned in earlier books that both of Greg's parents (his father was a native Scot, that's the McKenzie tartan at left) died in an airplane accident on the way to his graduation from the University of Michigan. After that he worked a few years as a deputy sheriff in St Louis County, Missouri. His uncle was Chef of Deputies. In the novel whose plot is currently stewing about in the soupy gray part of my brain, we meet the son of Greg's first cousin, a young man who lost a foot in Iraq and is at loose ends after coming out of rehab.

With all his wanderings about the world during and after his Air Force career, Greg had little contact with his uncle and cousins in St. Louis. Then the young man turns up in Nashville, charged with murder. As Greg frets over what to do, the case summons long-repressed memories of events from years ago. What happens and how it will turn out is your guess as much as mine. That's about all the background I need to get the old fingers tapping and see where the characters take the story.

A couple of other points I see through the fictional fog: a small cadre of militia characters and an involvement in drugs. That's all I can tell you for now. But keep watching these pages (bloggarly speaking) and I'll give some commentary as the project progresses.

Meanwhile, if you haven't read any of the books draped down the right side of the page, click on a cover to get more information, like plots, reviews, opening chapters, where to buy paperback or ebook. Enjoy!
Posted by Chester Campbell at 9:40 PM No comments:

The Bone Polisher Out as Ebook

Tim Hallinan, creator of the fabulously successful Bangkok mystery series featuring travel writer Poke Rafferty, has brought back the final novel in his previous series as an ebook available for the Kindle at Amazon.com.The title is The Bone Polisher, originally published by Dutton in 1996. Here's how the blurb puts it: 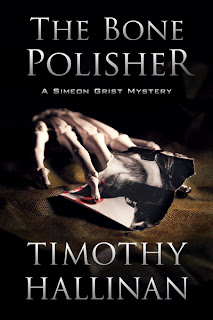 2011 Edgar and Macavity nominee Timothy Hallinan's sixth and final novel featuring erudite Los Angeles private eye Simeon Grist takes place in the West Hollywood of 1995, where the community is shaken by the brutal killing of an older man who was widely loved for his generosity and kindness. In a time when the police were largely indifferent to crimes against gay people, Simeon is hired to catch the murderer—and finds himself up against the most dangerous adversary of his career, a man who kills his victims one once, but twice: once physically and once in spirit. The story's climax takes place at a memorable Halloween-themed wake, but there's a big plot twist yet to come.
Booklist had this to say about it:
"Simeon Grist is a private detective with a problem: he is beginning to fear the bad guys . . . Hallinan's sixth Simeon Grist novel is putatively about a serial killer who is preying on the gay community of West Hollywood, but it is also a meditation on life, on commitment, on the meaning of age in a youth-obsessed and media-saturated culture. Hallinan captures the littlest human idiosyncrasies, the most mundane familial interactions, and infuses them with a depth of meaning not usually found in the crime genre. He even manages to do so with a sly grin and a loopy sense of humor. Read his latest as a straightforward detective novel, or read it as a slightly off-kilter philosophical tome, but do yourself a favor and read it!"
Mostly Murder gave it this equally glowing, though more succinct review

“Creepy . . . Screamingly funny . . . A snappy thriller . . . The only question that remains unanswered is whether success will spoil Timothy Hallinan."
Tim says it didn't sell enough copies to do that. But here's the kicker: you can get the ebook free on March 10, 11 and 12!

Do yourself as favor. Get it.

Posted by Chester Campbell at 10:24 PM No comments: