The Good, The Bad and The Murderous got a nice Five Star review on Amazon Kindle from Pat Browning, the talented author of Absinthe of Malice. Here's the review: 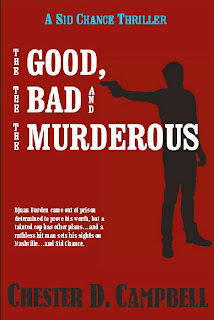 Opening line: "He was a young man, dark as the back side of the moon, dreadlock tentacles crawling down his shoulders, brooding eyes filled with questions."

The man is dead. Djuan Burden discovers the body in a small medical equipment store where he has gone to settle a disputed bill. Just out of prison, Djuan is arrested for the murder by a couple of cops who, if not downright crooked, are at least seriously bent. The arrest sets off a chain of events involving PI Sid Chance and his colleague, Jaz LeMieux.

Sid's background includes service as a Green Beret in Vietnam, plus a long career as National Park Service ranger and small town police chief. A false charge of bribery cost him his job but he is building a good reputation as a private investigator.

Jaz LeMieux's checkered career includes a few years as a Metro Nashville policewoman and a stint as a professional boxer. She's now chairman of a lucrative chain of truck stops called Welcome Traveler Stores. Not concerned with day-to-day operations, she works occasionally as an associate with Sidney Chance Investigations.

Djuan's arrest is serious business. He was only 12 when first arrested for murder and is now 25 years old, arrested as an adult for a murder he did not commit and possibly facing the death penalty. A couple of young lawyers in a high profile firm want to take on his defense pro bono, with Sid and Jaz doing the investigative work.

Between them, Sid and Jaz have helpful contacts in several phases of law enforcement, and they call on all of them as their investigation turns up Medicare fraud, dirty cops and a hired assassin working for a drug cartel.

The story moves at a brisk pace, with interesting characters doing interesting things. There's not a dullard in the bunch. It's not often I can call a crime novel a fun romp, but THE GOOD, THE BAD AND THE MURDEROUS has some of the best aspects of vintage TV shows like "The Rockford Files" and "Mission Impossible." The novel is highly entertaining and justice is served.


There'/s another review that sounds like a Four or Five Star review but only shows Three. You can read all the reviews at http://www.amazon.com/dp/B005FZ2WU6.
Posted by Chester Campbell at 11:22 AM No comments:

An Early Page in My Writing Career

My first really drastic move into the writing business took place about this time of year, many years ago. I wrote about it on the Make Mine Mystery blog last Friday. Since it's a chapter in my writing story that I've not explored in a long time, I decided to repeat it here with only minor editing. This is how it goes:


I saw The Miracle on 34th Street in the TV listings and got to thinking about something almost as miraculous I was involved in at this time forty-nine years ago. We were putting the final touches on the "Premier Issue" of Nashville Magazine, the city's first slick-paper monthly. Our office was located on Union Street in downtown Nashville. 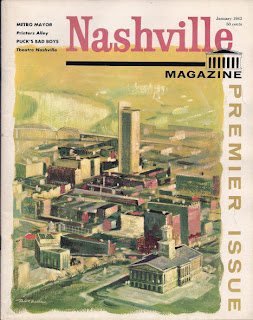 At right is the cover of that issue. That the magazine continued to appear monthly under my direction for six years and three months is certainly worthy of the miracle designation. I had worked as a newspaper reporter for nine years, sandwiched around a sojourn in Korea for the north-south unpleasantness, put in a short time free-lancing for national magazines, then spent two years at a PR agency. When I was "downsized" there, I lucked into a job with the State of Tennessee. That was late summer of 1962. I was told my job would be short-lived as the governor was leaving office at the end of the year. I was hired to write speeches for the governor, and my boss said as long as I got the speeches done, he didn't care what I did the rest of the time.


This sounded ideal as I had come up with the idea of starting a local magazine. Impressed by the highly-successful Atlanta Magazine, published by the Chamber of Commerce, I visited with the editor and learned what all was involved. Unsuccessful at getting the Nashville Area Chamber of Commerce to sponsor my project, I decided to pursue it on my own. I was thirty-seven at the time, full of you-know-what and vinegar. I approached the former secretary at the PR agency, and she agreed to join me in m.c. publications, inc., for Mikie (Evans) and Chester (Campbell). We each put up $500, and that was our capitalization. Needless to say, this is not what I was told would be required.


I was referred to a graphic artist at the Methodist Publishing House who agreed to be art director. Since we had decided on a January launch, I needed to put things together in a hurry. Although the Chamber declined to help monetarily, a few prominent members assisted me with recommendations. I've never considered myself much of a salesman, but in retrospect, I seem have done a helluva job getting the magazine in print.


I traded advertising for a lot of the necessary services. I found a printer who agreed to be paid after the second issue came out (he also took an ad). My art director was friends with a three-man art studio that did a lot of gratis artwork (one of them painted the downtown view for the cover). An engraver took an ad to cover most of our halftones, and I did an article on a young guy who ran an electronic data service (this was in the days of punch cards). He handled our mailing labels. I also provided an ad for a photographer.


I paid nothing for articles, but I called on several friends from my newspaper days to write for me. They were happy to help the magazine get started and found the new venture a unique opportunity. I had worked for the Nashville Banner and talked its sports editor into contributing an article on the city's minor league hockey team, the Dixie Flyers. Fred Russell was a regular contributor to The Saturday Evening Post and wrote its annual Pigskin Preview. As for the rest of the articles and features, I wrote much of that issue, as I did for each subsequent edition.


Subscriptions brought in a small amount of income, but the lifeblood of a magazine is advertising. I had to go after it myself. I convinced a couple of ad agencies to support the new venture, despite lack of a track record. One of them bought the full-color back cover. I also got full pages from the local electric service, the gas company, and a new luxury apartment project. A friend from my Air Guard unit bought an add for his import auto dealership, and the data service guy helped me get a half page from his father-in-law, owner of a finance company. I also wangled an ad out of the savings and loan association that owned our building.


I wound up with seven and two-thirds pages of advertising in that first issue, or a little more than 17 percent of its forty-four pages. Hardly in the ballpark for a break-even operation. It provided the start of many years of running hard to placate our creditors. After a couple of issues, I found an advertising manager and relinquished that part of the business. By the end of 1963, our forty-four-page issue had fourteen and one-half pages of advertising for a much improved 33 percent.


I had a great time with the magazine, despite fifteen-hour days. I came up with lots of great subjects to cover myself, in addition to assigning numerous others. I even ran some of my poetry anonymously. We published a few short stories by well-known local authors, without payment. But our circulation never got much beyond 10,000, and advertising was always a hard sell. We were about ten years ahead of our time. When our unpaid accounts got too far out of hand after five years, I turned to a good friend who was head of PR for Life & Casualty Insurance Company, one of Nashville's two large insurers. He talked the head of the company, wealthy former Ambassador Guilford Dudley, into bailing us out. We moved into offices on the twentieth floor of the L&C Tower and had money to pay contributors. But the guy they put over me as manager was a rehabilitation project, and it turned out to be more than I could take. After a few months I resigned. The new management didn't fare too well, and the insurance company dropped the magazine in less than a year.


But forty-nine years ago, I was as excited as a kid with a new toy. I was ready to make a miracle happen. And I did.
Posted by Chester Campbell at 6:11 PM 2 comments: 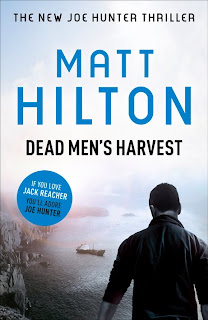 A blurb on the cover of Matt Hilton's Dead Men's Harvest tells it all: "If you like Jack Reacher, you'll love Joe Hunter." Reacher can be counted on for a high body count, but Hunter's toll would keep an undertaker busy for a couple of months.

Unlike Lee Child's protagonist, Joe Hunter is no lone wolf. He has his own team of associates who can be just as deadly. Interestingly, Matt Hilton, like Child, is a Brit who writes action adventure that takes place in the U.S. Hilton still lives in England. His character is English, an ex-military man who was an anti-terrorism agent with the CIA.

In Dead Men's Harvest, Joe Hunter is called on to take out a psychopath who calls himself Tubal Cain, a man he thought he had killed in the first book of the series (this is number 6). It's non-stop action all the way to the ultimate face-off at the end.

The complex plot involves a wealthy businessman who is a drug kingpin. He hires Tubal Cain to find and kill Joe Hunter's half-brother, reported to be in the federal witness protection program to provide key testimony that would wreck the criminal mastermind's business. Hunter's old CIA handler sends him after Cain to save the case for the government.

The book is filled with interesting characters, both good guys and bad. It includes the sister of a woman Hunter loved who was killed earlier. The sister becomes his new love interest. He works to save her, as well as his sister-in-law who is abducted from her home in England.

Joe Hunter's actions are over-the-top at times, though probably not as much as Jack Reacher's. He's been trained to kill bad guys but has qualms about those who are little more than bystanders. If you like lots of action and nasty characters getting their comeuppance, get a copy of Dead Men's Harvest.
Posted by Chester Campbell at 5:30 PM No comments: