Who Are the McKenzies?

I introduced Greg and Jill McKenzie to the fictional world in October of 2002 with publication of Secret of the Scroll. Since then the pair has garnered a long list of favorable reviews over four more books in the series. Whether you've been a fan of the McKenzies from the start or are new to the couple, here's a rundown on just who we're dealing with.

Greg was a tough, uncompromising law enforcement professional with a quirky sense of humor during his career with the Air Force Office of Special Investigations. He grew up in St. Louis where his mother taught school and his father was a master brewer with Anheuser-Busch. After his parents were killed in a plane crash on the way to his graduation from the University of Michigan, Greg tried his hand at police work as a deputy with the St. Louis County Sheriff. He spent four years there before joining the Air Force.

Greg retired as a lieutenant colonel, the highest rank of a long line of Scottish military men he was descended from. It started with the first muster of the 98th Argyllshire Highlanders in 1794 at Stirling Castle, north of Glasgow. Sixteen McKenzies answered the call. Greg’s grandfather, Staff Sgt. Alexander McKenzie, was a member of the 1st Battalion, Argyll and Sutherland Highlanders Regiment, a descendant of the old 98th. He fought in the Boer War in South Africa and in Europe during World War I. A battle wound forced his retirement and led to his emigration to America when Greg’s father was fifteen.

Jill Parsons was born in Nashville, where her father was a highly successful life insurance salesman. She met Greg when she was a junior in the aviation program at Middle Tennessee State and he was on his first assignment at a nearby air base. They married after her graduation. Her father died a few years later, leaving her well off financially. She operated her own air charter service at times during Greg's OSI career.

When Greg retired from the Air Force, they indulged a desire to wander for a few years before settling in Jill's hometown. Greg soon became bored with retirement and took a job as an investigator for the District Attorney. He lost that job after his comments about a Murder Squad detective wound up on page one of the morning paper.

That's where we find them when Secret of the Scroll, first book in the series, opens. All five books are available on Amazon in both paper and ebook. Next week, book two, Designed to Kill, will be only 99 cents for the Kindle.

Posted by Chester Campbell at 3:00 AM No comments:

I can't believe I haven't written  anything here in six weeks, but dates don't lie. By way of explanation, I've been busily putting the final touches on the last of my Post Cold War Political Thriller Trilogy. The title is Overture to Disaster, and it should be ready for publication in a couple  of weeks. Meanwhile, I have news on another front. 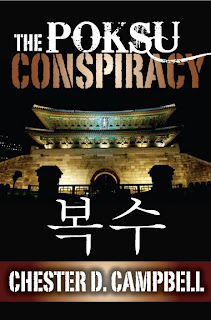 The second book in the trilogy, The Poksu Conspiracy, is now available here as a paperback on Amazon.com. That makes all of my current nine mystery and thriller titles available both on paper and in digital format. If you like big books, this one is a monster at 532 pages, at a price of only $15. Actually, Amazon currently has it discounted to $14.25.

The Korean word "Poksu"is translated as "Vengeance." It's a tale of the destruction resulting from one man's oath of vengeance for the death of his father sixty years earlier. On one level, the novel is an amalgam of a spy story and a Korean police procedural. Burke Hill, the main character from the first book, Beware the Jabberwock, now directs the clandestine side of a Washington public relations firm that's a CIA spinoff. His task is to find the truth about a report that Israel is helping South Korea develop nuclear weapons. Yun Yu-sop, a Seoul Metropolitan Police Bureau homicide detective, has been tracking the assailant he believes responsible for several murders of leading citizens who have supported friendly relations with the United States.

Captain Yun's investigation leads him to a Korean assassin who has his sights set on both Yun and Burke Hill. Reviewer John R. Lindermuth's review concludes with:

"Campbell's tale is well-drawn with richly defined characters, enough action to satisfy even the most jaded of readers and an absorbing plot. Highly recommended."

If you prefer the ebook to the paperback, you'll find it here.
Posted by Chester Campbell at 6:20 PM No comments: