It's Great When Readers 'Get It'

It's always a pleasure when readers "get it," that is, when they totally understand what the author is trying to say in a story. That doesn't always happen. In the case of Hellbound, my latest crime novel and first standalone, the reviews on Amazon indicate that it happened this time. There aren't many, only seven, three 5-star reviews and four with four stars. Most of the reviewers are identified as VINE VOICE, which indicates they are among Amazon's most experienced reviewers. 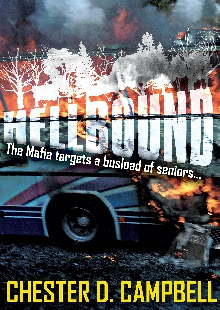 One of them, Susannah St Clair, top Amazon reviewer, captured the essence of Hellbound in the following three paragraphs:

Who would have thought a trip with a bunch of (us folk who want to hear all that 50’s music) on a big bus would be entertaining? I certainly wasn’t too sure about it but I am glad I took the time to read Mr. C.D. Campbell’s “Hellbound”. Entertaining it is with a nice bit of humor and a touch of romance thrown in. Mr. Campbell definitely knows his way around and writes a very good narrative along the way. His characters are nicely drawn and fun to “meet”.

Pulling a hurricane into the story along with the Mafia chasing their unknown quarry through New Orleans was a nice touch making things more scary to all aboard the bus and you the reader. Mr. Campbell has written several other books and it shows in the crafting of this one. Only saw one editing mistake, at least that I noticed. (But then I am a senior too..;<) )

If you're looking for a cute,  fast read, then this book is for you. Even more so if you're over 60. You may see yourself in one of these well etched characters!

My thanks to Ms. St. Clair for her comments. Those who have read my PI series know I attempt to portray older people in a favorable manner. As one who has been in those ranks for many years now, I know most "senior citizens" are just normal people who have passed the age of retirement. Many of them haven't retired but continue to perform valuable service to their communities.

Hellbound was a fun book to write because most of the colorful details of the scenes came from an identical bus trip my wife and I made with our church group back in the late nineties. Fortunately, we were not hounded by a gang of thugs as were the characters in the story, but the places they visit are as we saw them. Right up to the hurricane, that is. The trip we took went from New Orleans to Bellingrath Gardens near Mobile, then up I-65 home to Madison (Nashville).

You can read more about Hellbound on it's Amazon page or my website.
Posted by Chester Campbell at 4:52 PM 3 comments: