We're painting the inside of our house. The biggest challenge is my office in the bonus room over the garage. It's packed with the clutter of 15 years of the writing life. The main problem is I've found it virtually impossible to throw anything away. You never know when it might come in handy, I've always contended. In the process, things kind of get piled up here and there (think everywhere).

But the painter must be able to get to the walls to paint them. So last week we started digging into the clutter. My wife would pick up something and say, "Can we throw this away?"

You can't go around willy-nilly throwing stuff away. It might be something of infinite value to posterity. Or at least something worth showing to a curious great-grandchild. To prevent such a tragedy, I would begin to read. I found it's like doing research for a book. When you get onto a fascinating subject, it's difficult to stop. 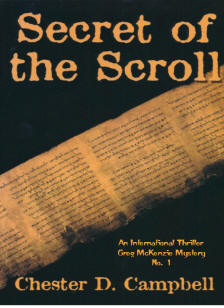 Taking some papers from Sarah, I found I was looking at notes I'd made from my trip to the Holy Land in 1998, the venture that led to my first published mystery, Secret of the Scroll. I took several hours of videos with the new camcorder I bought before leaving, and I looked through a partial script I wrote for an edited version I presented to my Sunday School class. Unfortunately, I loaned the tapes to someone who lost them.

It brought back memories of our tour starting in Jordan, where we visited Petra, the remarkable town carved out of reddish sandstone cliffs. Its best known site is the striking face of the Treasury, featured in the movie Indiana Jones and the Last Crusade. We walked through the narrow 250-foot high sandstone slot canyon called the Siq where Indiana burst into the open facing the vivid facade of the Treasury.

In Israel, we spent nearly two weeks taking in everything from the stark, windswept heights of Masada to the multitude of historic sites around Jerusalem, up through Nazareth and the Sea of Galilee, the Golan Heights and the port of Haifa, then back down the coast to Tel Aviv and the ancient port of Joppa. That's where Secret of the Scroll opens.

I decided to keep these few sheets of paper and followed my wife's urgings to move on. The next slowdown came at a pile of magazines with colorful covers. It was my complete collection of
Nashville Magazine issues over the nearly seven years I served as editor. I started the magazine in 1963 and struggled to keep it afloat all those years.

After putting down the few issues I thumbed through, I resumed the trip down memory lane. I sifted through a stack of newspaper clippings of reviews for my earlier books. This was back in the days when our local paper and those in smaller towns where I did signings printed such things. There were also posters from bookstores about my appearances, something I no longer do now that my sales are mostly online. Reluctantly, I decided the lot of them were of no value to anybody but me, and I no longer had room for them.

A little later, I found another itinerary for a trip through Europe Sarah and I took shortly after we married in 1999. Starting in Amsterdam where we watched a flower auction, we made a stop at the Luxembourg American Cemetery where World War II soldiers including Gen. George S. Patton, Jr. were buried. Then we toured Paris―the Eiffel Tower, Notre Dame Cathedral, the Louvre, Montmartre―and continued through Germany and Austria. We visited Vienna and such interesting sites as the Swarovski crystal headquarters.

Most of the tour was spent in Switzerland. We ranged across the country from Zurich to Geneva, plus soaring to the Alpine heights around 10,000 feet aboard a cable car where we looked across at of the magnificent Matterhorn peak. In the Montreux area along Lake Geneva, we toured Castle Chillon, location for Lord Byron's The Prisoner of Chillon Castle.


After all that reminiscing, I was forced to detour off Memory Lane and get back to the cleanup. But, alas, we're not finished yet.
Posted by Chester Campbell at 3:00 AM No comments:

Payoff to The Review Chase

In my last blog, I wrote about the chase after reviews, in particular one for my final post Cold War political thriller, Overture to Disaster. I talked about using Story Cartel to go after reviews. Well, it paid off. The first review, which just showed up on Amazon, is a doozy. It was written by Charles A. Ray and is quoted here in full:

Overture to Disaster by Chester D. Campbell is a post-Cold War political thriller that, in light of current events in Ukraine and other parts of the former Soviet Union, reads as if it could have been taken from the headlines or the lead story on CNN. I received a free copy for review, and found myself immersed in a story that rivals the best Tom Clancy novel.

This novel has everything – rogue former KGB agents who are determined to bring the U.S. to its knees through the use of stolen nerve gas with the help of the Peruvian terrorist group, Shining Path; senior U.S. officials who put profit and position before honor; and a few daring individuals, Russian and American, who are willing to put their lives on the lines to preserve peace and order.

Campbell’s knowledge of weaponry, tactics, and bureaucratic and political doings is first-rate, and he weaves it all together with characters that, while true to life, seem larger than life. The suspense is drum-tight, and the odds are astronomical, as a wrongly cashiered Air Force special operations pilot and a dedicated Russian criminal investigator race against time to prevent what could tip the world into a catastrophic confrontation with no winners.

Don’t even think about reading this book unless you have several hours to devote to it, because once you start reading, it’ll suck you into a world of betrayal and intrigue, and not let you go until the end.

I reserve five-star reviews for only the best of books, but if I could, I’d give Overture to Disaster six. Don’t let this one pass you by.

An almost 6-star review. Can you top that? Check it out on Amazon HERE.
Posted by Chester Campbell at 9:12 PM No comments: