Starting at midnight tonight, Pacific Standard Time, my fourth Greg McKenzie mystery, The Marathon Murders, will be free to download for the Kindle until midnight Wednesday, February 27. You'll find it at this link. 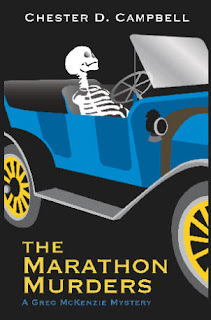 Some people glance at the name and think the story involves marathon runners. A good look at the cover should take care of that. It shows a skeleton seated behind the wheel of a Marathon touring car from the early twentieth century. The book involves a 90-year-old cold case, the murder of the assistant treasurer of Marathon Motor Works, a company that built a popular line of automobiles in Nashville from 1910 to 1914.

Actually, the company took its name from an event at the 1904 Olympics in St. Louis. Its car models were given such names as Runner and Winner. An industrious entrepreneur bought the rundown, long-vacant plant and office buildings a few years ago and restored them to provide space for artists, photographers, musicians, and other small businesses. That's where I got the idea for my mystery.

In The Marathon Murders, a construction worker finds some old company records from 1914 hidden behind paneling in the wall of a former office. The envelope includes the name of the assistant treasurer, Sydney Liggett, and a note indicating he planned to turn it over to the District Attorney. The job foreman finds Liggett's grandson, age 84, in a local nursing home. He promises to bring over the papers, then disappears.

McKenzie Investigations, run by senior sleuths Greg (retired OSI agent) and Jill McKenzie, are hired to find the missing papers. What they encounter is a string of murders committed to keep the secret of the 1914 documents hidden. The chase takes them to a small rural county near Nashville where things get pretty tense.

The book gave me the opportunity to highlight the work of the Tennessee Bureau of Investigation, which provides a vital investigative arm to law enforcement agencies outside the major cities. Midwest Book Review said: "This fourth installment of the Greg McKenzie Mysteries is proof positive the series remains strong and fresh and is a major contender in the mystery venue." If you're new to the Greg McKenzie series, this is an opportunity for a free look. Just click the link above (after midnight).

Posted by Chester Campbell at 12:58 PM No comments:

Besides being acknowledged as a top-ranked thriller writer, British author Zoë Sharp is a member of the Hard Boiled Collective, a small group of mystery and thriller writers to which I belong. Today I have the pleasure of introducing you to the tenth book in her Charlie Fox series, Die Easy. Here's the book cover of the U.S. edition along with a teaser from the back cover. 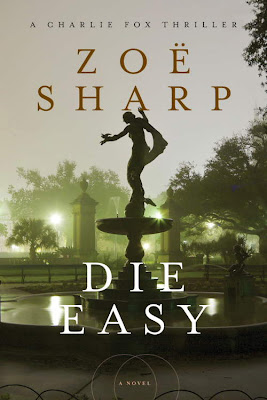 Professionally, Charlie’s at the top of her game, but her personal life is in ruins. Her lover, bodyguard Sean Meyer, has woken from a gunshot-induced coma with his memory in tatters.

Working with Sean again was never going to be easy, but a celebrity fundraising event in post- Katrina New Orleans should have been the ideal opportunity for them both to take things nice and slow. Until, that is, they find themselves thrust into the middle of a war zone.

When an ambitious robbery explodes into a deadly hostage situation, the motive may be far more complex than simple greed. Somebody has a major score to settle and Sean is part of the reason.

Only trouble is, he doesn’t remember why. 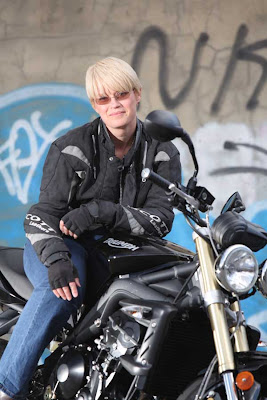 Zoë lives in the English Lake District. Her hobbies are sailing, fast cars (and faster motorbikes - see at left), target shooting, travel, films, music, and reading just about anything she can get her hands on

New York Times best-selling author Harlan Coben had this to say about her new book, just out in the U.S. last month.:

"Zoë Sharp is one of the sharpest, coolest, and most intriguing writers I know. She delivers dramatic, action-packed novels with characters we really care about. And once again, in DIE EASY, Zoë Sharp is at the top of her game."

Here are the first two chapters:

TWO
“C’mon, Charlie, it was just an exercise,” Parker Armstrong said. “The whole point was for you to make things as difficult for Sean as possible, really test the guy out.”
I remembered my faked mini-hysteria, the deliberate inaction that had stuck in my craw to maintain. I looked down at the coffee cup clasped between my tense fingers. “Well, I did that all right.”

Posted by Chester Campbell at 12:49 AM No comments:

How To Help an Author

Thanks to Timeline Photos for this excellent advice: 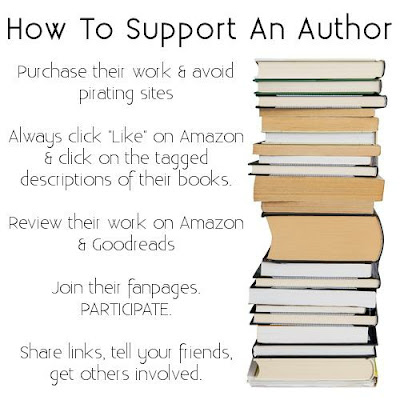 Go ye and do likewise.


Posted by Chester Campbell at 12:09 PM No comments: