Deadly Illusions Is Free for the Kindle

When I set up my tent at an outdoor festival, I can count on a few people to gaze about the array of covers and ask, "Which one do you like best?" My stock answer isn't really an answer at all. It's a statement. "That's like asking which one of my kids do I like best?" That would be partly true, partly a cop-out. It's true I don't have a favorite, but I view some a bit more fondly than others. One in this category is Deadly Illusions. Trouble is, this is the least expensive of my books at $12.95. Like all of my mysteries, though, it's only $2.99 for the Kindle. 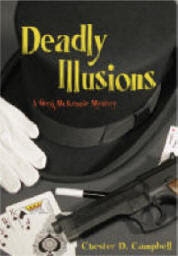 This is the third book in my Greg McKenzie Mystery Series. I particularly enjoyed writing it since it involved Greg and Jill opening McKenzie Investigations and launching their careers as PI's. The  response from reviewers was encouraging.


"Campbell's engaging style and masterful plotting makes for a fast-paced, thrilling read. His sharp wit left this reader laughing out loud at times, yet the steadily building suspense made for a white-knuckle, edge-of-the seat ride."

Midwest Book Review had this to say:

"Greg McKenzie is a senior investigator who relies on his experience to compensate for the brawn he might have engaged in the past. His wife, Jill, is an accomplished pilot, cook, and is the perfect partner for her husband. Campbell juxtaposes her correction of Greg's "blue language" and her obvious spirituality with her determination when the going gets rough and she has to use some of the private investigator skills that most people would shrink from. All in all, DEADLY ILLUSIONS is another winner in the Chester D. Campbell literary cabinet. Campbell obviously has many stories to share, and he continues to write fabulous mysteries."

In the book, Molly Saint hires new PI's Greg and Jill McKenzie to check into her husband's background, then disappears. It starts them on a tangled trail of deceit. Complicating matters further, Greg gets drawn into a troubling police investigation stemming from the assassination of the Federal Reserve Board chairman at a Nashville hotel. The case resurrects old problems with a Murder Squad detective and his colleages among Nashville's finest. The deeper the McKenzies dig, the more deadly illusions they face. After threats, break-ins, and another murder, the charade ends in a shocking showdown.

I enjoyed writing Jill's character, and the readers appear to approve, as witness the comments of Midwest Book Review's Shelley Glodowski above. Jill does something quite unexpected in this story, but I won't say anymore as I don't want to spoil it for you.

One dilemma mystery writers face is the necessity to continually ramp up the tension by putting your protagonist in progressively more dire situations. If you aren't careful, they wind up facing impossible odds. In this book, Greg and his homicide detective friend find themselves defenseless, confronted by a remorseless killer.

What happens? Read the book.

Posted by Chester Campbell at 3:00 AM No comments: