Of Cops and Guns

Sheesh! I can't believe I haven't posted on my blog since February. I've been working feverishly on Good, Bad & Murderous, the second Sid Chance book, but that's no excuse. I'm still not in sight of that magical THE END. Lately I've been attending the Metro Nashville Citizen Police Academy. It's only one night a week, but it has been quite interesting. 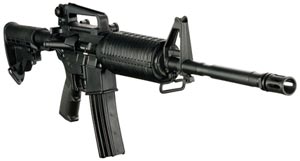 This morning I ventured out to the Metro Nashville Police Academy gun range and fired a few rounds. Shot the Glock 22 used by Metro police officers, an AR-15 from which the military M-16 rifle was derived, and a Thompson submachine gun. I had fired a "Tommy" gun while taking firearms training as a basic trainee in the Army Air Forces during World War II.

The officer who monitored my shooting kindly said I did good, that I had obviously shot before. Actually, I had fired on a range during MWA Florida's Sleuthfest mystery conference for a couple of years, though that's been awhile back.

Our police instructors gave high praise to the Taser (shown at right) as a defensive weapon, particularly for anyone who's unsure they have the will to use deadly force. Most of us think we would fire a pistol at someone who is threatening us, but when it comes time to pull the trgger, some have second thoughts.

The model cops use (at right) has a light and camera on it. Everything that takes place during use of the Taser is available for playback as a movie with sound. This is available for use in court to show how the weapon was deployed. It may include whatever threats the subject used against the officer. The smaller civilian model has no camera. Held in the hand, it looks much like a cell phone. Similar to the law enforcement version, it projects a red laser dot on the body where it's pointed. That's where the two barbs will hit when the trigger is pulled, giving a debilitating shock nineteen times per second.

The instructors debunked a lot of stuff shown on TV, such as a gunshot blasting a person backward. Also the one-shot kill. They said people have been shot multiple times and kept on coming at the shooter. Only three to four percent of people shot with a gun are killed. Frequently a shootout will result in no one being hit.

We were told how the Metro Police Department came to switch from a six-shot revolver to the Glock 22 with a magazine that holds fourteen bullets. Two officers went to a house looking for a fugitive with an outstanding warrant. His girlfriend said he wasn't there, but they searched and noticed scraps of insulation on the closet floor beneath an attic opening. They went up and found the man crouching in a corner. When they told him to come out, he opened fire, shooting numerous rounds with a crude-looking pistol that had an enormous magazine attached.

Both officers were hit but returned fire. One went down and the other jumped through the closet opening. Homicide detectives theorized that the fugitive thought the downed cop was dead until the oficer fired his last shot. Then the criminal stood over him and shot him in the head. The first officer went for help and the crook climbed down. When he heard more cops outside, he started firing indiscriminately through the front wall. They finally killed him.

The policemen complained to the chief that the officer might have lived if he'd had more rounds to fire, putting him on a more equal footing with the fugitive. The chief told them to find what they wanted. After testing and studying several guns, they decided on the Glock 22 and the department bought one for every sworn officer.

Though the cops are well armed now, they still suffer some disadvantages under the law. As one of them put it, "A mail carrier is better protected than we are. The penalty for punching an officer in the nose is the same as stealing bubble gum at Walmart."
Posted by Chester Campbell at 7:50 PM No comments: