I suppose I should be called the accidental novelist. Unlike many of my writing colleagues, I never penned stories as a kid or spent hours at the library checking out children's mysteries. As a teenager I enjoyed reading fiction, but it was mostly short stories in magazines like The Saturday Evening Post and Liberty. My Nashville high school had a student newspaper, but I never had any interest in writing for it. The closest I came to being involved in the literary field was as co-advertising manager for my high school yearbook as a senior in 1943.


I first wrote about my accidental entry into the writing game when I updated my website several years ago. I wrote an article titled "Reflections on The Writing Life—My 60-year odyssey with the written word." In it I told how I volunteered for Aviation Cadet training in the Army Air Corps after graduation in June of 1943. I was called to active duty the following January after turning eighteen. With the air war in Europe going our way, they didn't need as many new pilots, bombardiers, and navigators as they did when I signed on. With the rank of Aviation Cadet, I was shifted about the Southeastern Training Command, winding up in the summer of 1945 at historic Randolph Field in San Antonio.

After first serving as a guinea pig in the School of Aviation Medicine, where I was probed and prodded by candidates for Flight Surgeon, I was assigned as a clerk in the Transient Bachelor Officers Quarters. Another cadet and I
mostly checked in and out pilots there for an overnight stop. We also served as cashier in the Officer's Mess that occupied another part of the building. My partner, a cadet named Wolfson, had spent a year at Yale before entering the service. While we were chatting one day, he said, "Ïf I had it to do over again, I'd study journalism."

That somehow struck a chord with me. Up to that point, all I'd ever wanted to do was fly airplanes. But with the war winding down, it didn't look like that would happen. The more I thought about it, the more I became obsessed with the idea. Journalism schools only dealt with upper class students, so after my discharge I immediately enrolled at the University of Tennessee, intending to transfer to some place like Wisconsin or Missouri in my junior year. But the accidental nature of my career still ruled supreme.

When my sophomore year began, the executive editor of The Knoxville Journal took a year's sabbatical to teach a newspaper reporting class at UT. I immediately enrolled.Then I learned the university was bringing in a new professor to start a full journalism curriculum the following year. By then I was working on the student newspaper and was in line to become managing editor of one edition. But shortly after school started that fall, The Journal editor, who had returned to his old job, called me and a couple of other of his former students and offered us jobs as reporters. 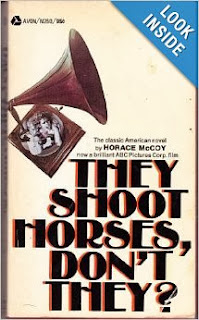 Since The Journal was a morning newspaper, we could go to school during the day and work as reporters at night until the first edition was put to bed, as we journalists would say, around eleven o'clock. But it gets even worse...er, more complicated. While browsing the library near the newspaper office one day, I came across two books by Horace McCoy, They Shoot Horses Don't They? and No Pockets in a Shroud. I devoured them and became hooked on the mystery genre.

While going to journalism school during the day and working at the newspaper at night, I managed to squeeze in time on my little portable typewriter to write my first crime novel. I had filled in occasionally on the police beat and wrote a tale of a young reporter helping solve a murder. I gave it the title Time Waits for Murder, sent it off to a publisher, and soon had my first rejection slip.

I also wrote a spy story in the sixties, but it was 2002 before my first published book came out. My journey as an accidental novelist would take too much space to continue here, but if you'd like to read the full story go to my website where  you'll find the article I wrote in 2008. Incidentally, that 60-year odyssey is now up to 66.
Posted by Chester Campbell at 6:54 PM No comments:

That free promotion of Designed to Kill covered in my last post turned out well. It recorded more than 49,000 downloads, by far the best results of any such promotion over the last year. And while Designed to Kill hasn't set the world on fire as sales since the free deal went off, all of my other books have been doing well for the Kindle.

Secret of the Scroll (Greg McKenzie book 1) and Deadly Illusions (book 2) have been the best sellers. The other salutary effect of the promotion was a near doubling of reviews on Amazon for Designed. It now has 43 reviews, including 22 five-star and 12 four-star. So hopefully it will continue to do well in the days ahead.

I'm planning another freebie promotion in a few weeks and will announce the book shortly. Meanwhile, if you haven't read my new trilogy of post Cold War political thrillers, give 'em a try. The final book, Overture to Disaster, is a real tour de force, with parallel plot lines that take you around the world as one crisis after another piles up.

I've started work on the sixth Greg McKenzie mystery and hope to have it finished in the next few months. That is, provided I don't pull any more tricks like the one I did last week in Dothan, AL. If you haven't seen my Facebook post, I banged my head on a tile floor on the way to a vacation in Florida, resulting in seven staples pulling my scalp back together. We cancelled the vacation and came back home. I had the staples taken out today. I don't advise trying this trick.

Posted by Chester Campbell at 2:00 AM No comments: