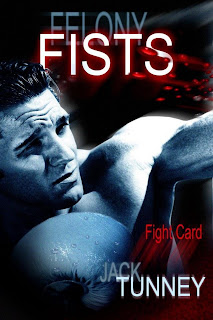 The Fight Card series of novels is inspired by the boxing/fight stories in the sports pulps from the '30s and '40s, such as Fight Stories Magazine and Knockout Magazine as well as the Sailor Steve Costigan tales from Robert E. Howard. The series is written by a team of authors. The first one came out a few days ago from the pen of Paul Bishop. All of the books are written under the pen name Jack Tunney (remember Gene Tunney and the famous "long count" fight with Jack Dempsey in 1927).

Patrick “Felony” Flynn has been fighting all his life. Learning the “sweet science” from Father Tim the fighting priest at St. Vincent’s, the Chicago orphanage where Pat and his older brother Mickey were raised, Pat has battled his way around the world – first with the Navy and now with the Los Angeles Police Department.

Legendary LAPD chief William Parker is on a rampage to clean up both the department and the city. His elite crew of detectives known as The Hat Squad is his blunt instrument – dedicated, honest, and fearless. Promotion from patrol to detective is Pat’s goal, but he also yearns to be one of the elite.

And his fists are going to give him the chance.

Leading with his chin, and with his partner, LA’s first black detective Tombstone Jones, covering his back, Patrick Flynn and his Felony Fists are about to fight for his future, the future of the department, and the future of Los Angeles.

Read more about Paul, including his hit TV series of the past summer, Take the Money and Run, at his blog Bish's Beat.

Check out all my books at Chester D. Campbell.com
Posted by Chester Campbell at 9:41 AM 1 comment: 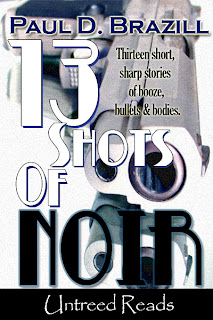 If you're a lover of noirish short stories, keep an eye out for this book, COMING SOON. It's from British mystery writer Paul D. Brazill, who now lives in Poland. To learn more about Paul, click this link to his blog:

You Would Say That, Wouldn't You?
Posted by Chester Campbell at 6:39 AM No comments:

Reviews: The Good, The Bad

Everybody likes to get good reviews for their books, and I've been fortunate to get lots of them over the years. I just received a great one for The Good, The Bad and The Murderous. In a section headed "He Did It Again!" reviewer Sylvia Cochran at The Deepening wrote:

"Kind readers know that I am a fan of Chester Campbell’s writings. He 'gets' detective fiction on a gut-level. There is no contrived dialog, questionable literary tactic or predictable plot turn. Mystery buffs, who are strong aficionados of the Chekhov’s gun technique, most certainly celebrate the author’s solemn dedication to not litter the plot with confusing and pointless elements. Instead, there is no hole in the plot and all loose ends are tightened neatly before the last page. (Did I mention that this book is superbly edited?)"

I've never received a trashy review like some of the one-star diatribes I've seen on Amazon, but I've had a few that are a mixture of good and not so good. That's an interesting gray area. The conventional wisdom says to just forget it and move on. Be happy they mentioned your book.

Looking at the situation a bit more philosophically, it fulfills the reviewers job of giving an opinion as to the strong points and weak points in the story. What you have to remember is that this isn't rocket science. It's strictly one person's opinion. It's the same state of affairs you run into when querying an agent or an editor. What one person dislikes, another may praise.

In the case of this review, after saying how the crime was solved amounted to "a good study of methodical detective work," the reviewer concluded:

"If I’m going to buy a thriller I want foul language, aggression and sexual tension. But if I’m looking for a well-written murder mystery, this book would do fine."

I mentioned in an earlier post that the book started out like a mystery and ended like a thriller. Before the cover was finished, the publisher decided to call it a "Sid Chance Thriller." Thrillers seem to be the genre of preference these days. As I said, opinions differ. If throwing F bombs around like cigarette butts is a requirement for a thriller, I suppose I'll never write one. I see no need for it. In the few of his thrillers I've read, Harlan Coben didn't use a lot of foul language.

If several reviewers make similar critical remarks about a book, it's time to reevaluate. But debating whether something is or isn't a thriller hardly seems worth the effort. I'll just accept my reviews and be happy with them.
Posted by Chester Campbell at 9:34 AM No comments: