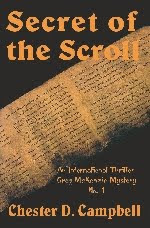 
Posted by Chester Campbell at 3:00 AM No comments:

Where Do You Start the Story?

When you begin writing a book, the obvious first question is where to start the story. If the whole premise of the book and everything that happens flows out of events that occurred many years before the current action, to me it calls for a Prologue that details the background to the plot. I'm aware that some readers refuse to read prologues and skip to start at Chapter 1. To me, this is a shortsighted approach. In the first place, what's the difference if it's called the Prologue or Chapter 1?

My second Post Cold War thriller opens with a Prologue that sets the scene for the story that follows. Since the action takes place mostly in South Korea, we get a little historical perspective on the area and how it developed into an ideological punching bag over the years. It's a key to understanding the motivations of those who people the story.

I carefully researched the background to make sure the history was accurate, which it is up to the point where my fictional character, Young Tiger Lee, picks three of his Northeast Anti-Japanese United Army comrades in Manchuria to form the Poksu (Vengeance) guerrilla group. Returning to their Korean homeland, they wreak havoc on the Japanese Army during World War II.

As I mention in the Prologue, the Japanese forbid use of the Korean language during the occupation. But young Lee, not his real name, chose to use the hangul characters for the Korean word for vengeance, written inside a square, as the mark of his guerrilla group. They left it at sites of their attacks against the Japanese.

As I mentioned in a blog recently at Murderous Musings, The Poksu Conspiracy could be called half spy story, half Korean police procedural. Much of the story is told from the POV of Captain Yun Yu-sop, a homicide detective in the Namdaemun Police Station of the Seoul Metropolitan Police Bureau. The espionage half involves a CIA spinoff called Worldwide Communications Consultants, where my protagonist Burke Hill handles clandestine activities.

Both spies and cops wind up seeking to identify who Young Tiger Lee turned out to be as a key to what's going on in South Korea.

The first book in my Post Cold War thriller trilogy, Beware the Jabberwock, involves an operation designed to eliminate the American and Russian presidents in a highly public assassination. It is code named Jabberwock. The team of assassins is composed of three men with widely different backgrounds. They train for the operation at a tiny island off the Florida Panhandle coast. Those charged with getting them prepared for the job compose an  equally varied group of four men.

What motivates people to get involved in such a reprehensible plot? For the trainers, it's just part of the job. There's a CIA clandestine officer and a KGB lieutenant colonel who have been involved in nefarious activities during the Cold War, each man totally committed to his superiors who devised the scheme. The other two involved in training the operational team are former military officers now in well-placed industrial positions directly beneath corporate chairmen who believe the current  administration is dangerously compromising the nation's position of preeminence.

The team of assassins includes an American ex-Green Beret, Gary Overmyer; an explosives expert with the old Stasi, East Germany's hated State Security Service, Hans Richter; and a Palestinian freelance hit-man, Naji Abdalla. Each man was given $125,000 with a promise of an additional $350,00 at conclusion of the operation.

Overmyer had wound up in a psychiatric ward after Vietnam. He then failed at several jobs before succeeding in writing Vietnam War stories for adventure magazines. He enjoyed taking to the woods to practice his stealth skills, scaring the daylights out of people along trails when he jumped out dressed in camouflage gear, features darkened with face paint, carrying an automatic weapon. The reason for his dedication to Jabberwock resulted from falling in love with a young  Moscow Radio Symphony Orchestra cellist a couple of years before.

When Overmyer went to Moscow to try and arrange an exit visa for Natasha Grinev, he was thwarted at every turn. He had thought perestroika and glasnost would have softened the Soviet bureaucracy. He sought help from the White House, but got the same story: "These things take time." He returned to Russia to visit Natasha and received shocking news. She had been killed in the collapse of a poorly constructed concrete apartment building. He blamed both presidents for the delay that ended in her death.

As the East German communist government fell from power, the Stasi began burning its documents to hide the records of its misdeeds. The German people fought to halt the destruction, and Hans Richter's records survived. He fled the country and saw no prospects for returning.

Naji Abdalla spent his formative years in a Palestinian refugee camp in southern Lebanon, waiting for the day he could carry a rifle and join in the battle to free  his homeland. But he soon learned the leaders spent more time fighting among each other. He moved from one band to another, learning the use of every kind of weapon, including the curved Bedouin knife an old Arab taught him. He finally broke with the bands and established himself as a one-man guerrilla force available to the highest bidder.

To learn more about these assassins and what happened to them, go to Beware the Jabberwock.

Posted by Chester Campbell at 9:20 PM No comments: