Digging into the Past

There's no telling what you'll turn up if you go shuffling through files you haven't delved into in years. I discovered the  results the other day while cleaning out a filing cabinet. What I came across was a sheet of background information on my first two published novels. I had forgotten about compiling the data.

The first interesting fact I came across was when I started working on Secret of the Scroll and when the book finally made it into print. I began the writing process in January of 1999. The end came three years and nine months later when I received my first copies—October 2002. I typically do a dab of research before starting to write but complete the bulk of it along the way.

Checking my notes, I read numerous books on biblical archaeology, the Dead Sea Scrolls, and the Bible Codes. My interviews included one with a professor at Emory University, the Special Agent in Charge of the OSI detachment at Arnold Air Force Base, Tullahoma, Tennessee, and a United Methodist preacher I had known from my church in Madison. I dug through lots of internet articles on such subjects as the Bible Codes and Shin Bet, the Israeli Secret Service. I  consulted Israeli tour books and the Royal Jordanian Airlines inflight magazine from which I gleaned the idea for the book.

With all the research along the way, I finished the writing part in eighteen months. Then I sent out query letters to thirty agents. I got one request to see the manuscript and mailed it to the agent in  December 2000. On her advice I sent Secret of the Scroll to a professional editor, received some valuable feedback, revised the manuscript, getting the final edit in June 2001. I sent it back to the agent and heard nothing until December when I received a call from her husband, who headed a small press. He offered me a three-book contract. 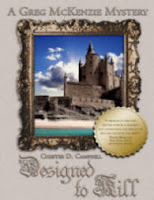 I started book two in  the Greg McKenzie Mystery series, Designed to Kill, in October 2000 after completion of the first book. Most of the research and part of the writing took place while my wife and I stayed at my brother's condo at Perdido Key, Florida, site of most of the action. I didn't have anything published at the time, but I didn't hesitate to interview people like a law enforcement ranger at the Gulf Islands National Seashore, a sergeant and an investigator with the Escambia County Sheriff's office, an official in the Building Inspections Department, and a forensic investigator and an Associate Medical Examiner with Florida's First District.

I did research at the Pensacola Historical Society archives, a Biloxi, Mississippi casino (that's fun research), and with several engineering friends. The book was released in March 2004.

I've had eight more novels published since then, and there are many more stories connected to them. I don't know what else I might find in the files, but I'll glean a few more thoughts to use in future blogs. Stay tuned.

Posted by Chester Campbell at 2:00 AM No comments: