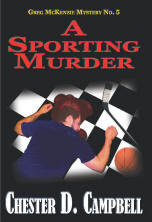 This will be my third release by Night Shadows Press.
Posted by Chester Campbell at 1:00 PM

Congratulations on the new book,Chester. That's an intriguing cover. Congrats also to Justin. A probationary black at nearly 13 is quite an accomplishment.

Thanks, Jean. Justin had to drop out awhile because of asthma and school, but he's back in this summer.