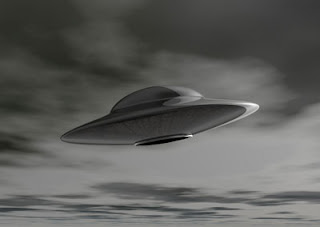 It isn't true! Those rumors that I was abducted by aliens or waylaid by one of the bad guys from a Greg McKenzie novel have no basis in fact. As a former Air Force type, I suppose you could say I've been AWOL for the past three months. The problem is I simply wasn't able to scrape up enough time to do this blog along with a weekly contribution to Murderous Musings, a semi-monthly post at Make Mine Mystery, various attempts at promoting my current five books (including putting The Surest Poison on Smashwords - you can download it in various ebook formats here for 99 cents through May 8 using Coupon Code LK26E), and get my fifth Greg McKenzie book finished.

The good news is that A Sporting Murder is finally done and in the editor's hands. It will be published in the fall. I hope to have a cover to show shortly.

It would've made a better story if I'd said I just escaped from Area 51 with a couple of reconstituted aliens who were unfrozen by a passing saucer. But I'd make a lousy sci fi writer. I'm too literal minded.  I don't even believe in vampires and werewolves.

So what do I believe in? I think there's something strange afoot in the solar system. The temperature hit close to 90 degrees in Nashville yesterday. And that's after we froze our butts off less than as month ago. An unbelievably snowy winter followed by a weirdly hot spring. What's up with that? I don't know if it's a case of global warming or global cooling. Maybe global confusing. 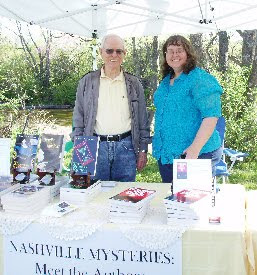 At Buttercup Festival with colleague Beth Terrell.
All I know is it was a  great day to be outdoors last Saturday in my new tent selling and signing my Greg McKenzie and Sid Chance books at the Buttercup Festival. Yep, you read that right. A celebration of the lowly buttercup in Nolensville, TN, a small town just to the south of Nashville. Sold a decent number of books and met some awfully nice people. (Putting awfully and nice together is good Southern talk.)

I don't want to bore you too badly on this first attempt to get back into the personal blogging game, so I'll mosey on to my next chore, taking grandson to his tutoring session and walking two miles at the mall. See you soon with something a bit more interesting, hopefully.
Posted by Chester Campbell at 8:01 AM

It sounds like a busy and productive few months for you. I’m glad you weren’t abducted and I’m glad to have you back.

I like your term “global confusion.” That describes our unusually cold winter weather and our wetter than usual spring here in southwest Florida.