Looking in Your Own Backyard

My guest today is Marilyn Meredith, the author of two series, the Deputy Tempe Crabtree mystery series and the Rocky Bluff P.D. series. Her latest book in the Crabtree series is Dispel the Mist from Mundania Press, http://www.mundaniapress.com . She lives in the foothills of the Southern Sierra which is located in Central California, a place quite similar to Bear Creek where Deputy Crabtree is the resident deputy. 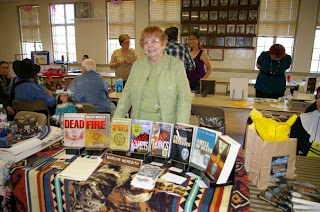 “What am I going to write about this time?” As a writer of a mystery series with characters that are far too real to me to forget about, that question comes up at least twice a year when it is time to begin a new book.

While I was researching Kindred Spirits I spent a lot of time in Crescent City with a Tolowa woman who has since become a good friend. She told me stories about Big Foot and his reported appearances in the giant redwoods surrounding the area. Later, when I was writing the book I did some research on the Internet about Big Foot and found a most intriguing reference along with pictures of The Hairy Man. What was more interesting to me was the fact that The Hairy Man resided in my backyard.

Of course not literally in my backyard, but in the mountains that I can see from my house and on the Tule River Indian Reservation that is merely a few miles away. What I learned about The Hairy Man is there is a pictograph of him and his family in a rock shelter on the reservation. Of course I was intrigued and had to find out more.

I know the anthropology professor at our local college and emailed him and asked, “What does it look like at the rock shelter with the pictograph?” The reply came almost immediately, “We’re going on a field trip to the Painted Rock site, do you want to come?”

My answer flew back, “Where and when?”

The rock shelter is made up of huge boulders, one piled on top of two others forming a cave-like shelter. Inside are the pictographs of The Hairy Man along with his family and other colorful paintings. One of the Indians who lives on the reservation guided us on our tour and pointed out many things in and around the Painted Rock site.

He noticed me taking notes and gave me this warning, “Don’t come out here at night.” I asked why and his answer was, “There are too many spirits.”

He certainly didn’t have to worry about me doing that. Finding the rock shelter in the daytime wasn’t easy, climbing down the huge boulders wouldn’t have been possible for me if I hadn’t had help from the young students. There was no way I would ever go there at night. But my heroine, Tempe, certainly could and would.

That was the beginning. From there I created the story of Dispel the Mist and Deputy Tempe Crabtree does go to the Painted Rock at night where her life is threatened and she has an encounter with The Hairy Man.

This is one mystery that came from looking in my own backyard.

Go to my website http://fictionforyou to read the first chapter of Dispel the Mist.

Thank you, Chester for having me visit you today. I know that you look in your own backyard for ideas for your mysteries too.

Here is a brief plot summary of Dispel the Mist:

A Tulare County Supervisor, with both Native American and Mexican roots, dies under suspicious circumstances. Because of Deputy Tempe Crabtree’s own ties to the Bear Creek Indian Reservation, she’s asked to help with the investigation. To complicate matters, besides the supervisor’s husband, several others had reason to want the woman dead.

Tempe has unsettling dreams, dreams that may predict the future and bring back memories of her grandmother’s stories about the legend of the Hairy Man. Once again, Tempe’s life is threatened and this time, she fears no one will come to her rescue in time.

Posted by Chester Campbell at 11:14 AM

Thanks for visiting my blog today, Marilyn, and good luck with Dispel the Mist.

I guess you really don't have to look far for inspiration, huh?

Marilyn's real life trip to the Tule River Indian Reservation and her character's adventure sound really interesting! I don't believe in things like Big Foot or anything but gosh do they make for great entertainment!

It's fascinating discovering where story ideas come from.
Thanks for sharing Marilyn. :-)

No Download Casino tyuueooru
Best Online Casinos
You can kill a lot of your leisure time and have fun at the same time simply by enrolling yourself into the world of online casino.
[url=http://www.nhgaa.org/]Casino Gambling[/url]
000 free with your first 20 deposits!
The risks arriving with the gambling has decreased to a great extent after the arrival of free online casino.
http://www.nhgaa.org/ - No Download Casino
If you end up choosing a not-so-good online casino website, you'll never enjoy the actual pleasure arriving with online gambling.