Tales from the Book Signing Circuit 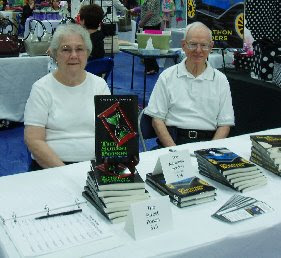 Some authors hate book signings. I love ‘em. It’s an opportunity to talk to people about your books and, if you’re lucky, sell a bunch of them. I say luck, and there is a bit of that involved, but if you do it right chances are you’ll come out okay.

I’m not a Joe Konrath, who will take a notion to visit something like 500 stores in a two or three-month period. But I do a decent number of signings each year at bookstores and fairs and libraries and conferences. There’s always something interesting going on.

If you’ve encountered me before on the listserves, you probably know my wife and I work as a team at signings. She stands at the store entrance, hands out promo folders to people who admit they read mysteries, and tries to direct them over to the table while I stand ready with a smile and a book or so. She gets most of the questions about where’s the restroom, but a few will pause to ask me things like where’s the newsstand? That happened at my last signing, and I said I had no idea. A store employee straightened me out. It was right across from my table. So much for my powers of observation.

One of our most interesting experiences taught us not to pass up prospects because they don’t look like buyers. It happened back in 2004 at a Borders in Orange County, CA. My signing table sat right beside the entrance, and Sarah stood in front of a large table of books facing the doorway. We had already seen a bunch of kooky looking characters in the area, but the one who came in about halfway through the signing looked like a real oddball.

A tall man with scraggly gray hair and beard, he wore boots and what appeared to be a blue denim kilt. His T-shirt read “I only came in for the beer.” He carried some sort of small case that we figured might have held all his worldly belongings. Sarah didn’t bother to ask if he read mysteries, thinking he was probably a homeless character coming in out of the hot sun.

A few minutes later she noticed him wandering about the table behind her. She approached him with a folder and he appeared interested. She also noticed he was clean and well-spoken. He said he really didn’t need to be buying books. He had three bedrooms, and all of them were full of books. But he came over to the table and had me sign one of mine for him. The moral of the story is don't judge a book by its cover.

We both invariably get someone who will say, “I don’t need to read mysteries. I’m a mystery myself.”

And then there was the woman at Books-a-Million in Clarksville, TN who replied to the query about reading mysteries, “Not today. It’s raining.” Sarah wanted to say she didn’t expect her to walk out of the store reading the book, but being a good sales rep she’s always on her good behavior.

At a signing in Madison, the Nashville suburb where I live, a young Korean woman with obvious Oriental features came up to me with a big smile and blurted out, “Daddy!” People nearby looked around and wondered, I’m sure. But I knew what was happening. I have a Korean daughter-in-law who calls me that, and her friends had taken up the habit.

When Sarah tells them the book is by Chester Campbell, somebody will always come back with “I’ve never heard of him.” She’ll point across at me and say, “Well, he’s right over there.”

Some will turn their heads and hurry past. Others will wander off down the aisle reading the brochure. Occasionally, they will come back up front and buy a book. But the ones I like best are those who walk right up, take a book and say, “I want one.”

Even better are those people at places like the Kentucky book Fair, where I had four books on the table, who will say I'll take one of each.

At the start of this I mentioned the "luck" factor. I try to set up signings at times when the store is most likely to be busy. But you don't always get it right. If it turns out to be one of those days when people just aren't out shopping for books, make the best of it. Keep smiling and chatting. Store personnel like upbeat authors and will help you all they can.
Technorati Tags:
book signings, books-a-Million, Borders, Joe Konrath, mystery readers

Never try to guess who will buy and who won't! After almost 300 signings, I figured that one out, and it still amazes me the unlikely people who will purchase one of my books.

Your post made me smile, Chester. I can relate to many of your signing experiences.