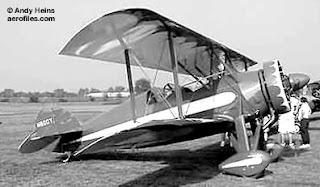 What we did as kids no doubt set the stage for what we’d do as adults. In my case it was to dream adventures that would lead me to write equally hair-raising stories many years down the line. And some of the dreams actually took place.

I was fascinated by airplanes at an early age. I glued many a strip of balsa pinned onto the plans for a World War I Fokker or SPAD or Sopwith Camel. Johnny Green, the boy next door who was a year older, lived in a bulky three-story frame owned by his grandparents. It had a small one-room house in back that must have been for servants originally. We played there flying our imaginary aircraft. Once we scrounged up a world map and plotted a global flight.

Johnny and I were thrilled no end at the news of Wrong Way Corrigan’s small plane flight from New York to Ireland in the summer of 1938. My interest was piqued further by my father's habit of driving out to Berry Field, the Nashville airport, on Sunday afternoons to watch the airplanes take off and land. When I was 12, he bought tickets and took my brother and me up for a ride in an Ogden Tri-Motor.

Johnny's uncle further whetted our appetite for flying. A member of the National Guard’s 105th Observation Squadron, he took us to the airport and let us climb in one of their O-47s. It was a squat, single-engine airplane that sat low on the ramp. It had a long greenhouse type canopy. I used one of them in the plot of The Marathon Murders.

The memory is a little hazy after 70 years, but it was probably the following summer when I was 14 that Johnny Green and I began saving our pennies and nickels and dimes with a plan in mind. On trips to the airport with our parents, we had seen a sleek WACO biplane with a snazzy radial engine and streamlined fenders over the wheels, piloted by a smiling young man with a windblown look. He sold 30-minute joy rides for something like five dollars.

We lived in East Nashville, a genteel middle class area a few miles from the Cumberland River and downtown. We had pedaled our bikes all over the area and knew our way around. Sneaking a map from one of the cars, we plotted our route to the airport, which was about 10 miles away. Using our normal excuse, he told his mother he was going somewhere with me, and I told my grandmother, who kept us while my mother worked, that I was going somewhere with Johnny.

With our $2.50 each in our pockets and small brown bags of peanut butter and crackers, plus a couple of candy bars, we embarked on our journey. Rather than head south toward town, we rode north to the Inglewood suburb where a ferry took us across the river. From there, all we had to do was follow McGavock Pike to the airport.

We had picked a bright, sunny day and encountered no problems along the way. The trip took a couple of hours. After resting up a bit while we ate our goodies, we headed over to the fence area where the pilot hung out. We showed him our cash and said we were ready to ride. I think he would have preferred $5 each, but the plane was a two-seater, and we would only occupy one seat together, so he led us out to the plane.

We hadn’t left the ground, but we were flying high. He boosted us into the open cockpit and strapped us down. A little prop cranking to start the engine, and we were off into the wild blue yonder. It was the most exhilarating feeling you can imagine. He did some steep turns so we could see the landscape below. I think he looped it, but I wouldn’t swear to that. This was around 1939 and there was no FAA to bother with.

The 30 minutes was over all too soon. With that thrilling experience to chatter about, we didn’t start worrying until we got close to home. “Where have you been?” was the first thing we heard. We admitted to crossing the river and peddling around McGavock Pike, but nothing about the airport. Things were pretty tense for awhile.

Johnny moved away by the time I got to high school, but we kept in touch. Both of us went into the Army Air Forces after graduation. Not long before World War II ended, I wound up at the San Antonio Aviation Cadet Center, now known as Lackland Air Force Base. It was split off from Kelly Field, one of the oldest U.S. air bases. One of my mother’s sisters lived in San Antonio, and her husband was a mechanic at Kelly Field. In a visit there as a boy, I toured the shops at Kelly and saw where they repaired the aircraft. I’ll never forget going into the paint shop, where they applied dope to the fabric covering of the planes. The smell penetrated everything. It was like sitting in a pool of mashed bananas.

Though long retired from the Air Force Reserve, I still love airplanes. My Greg McKenzie character is retired Air Force and his wife, Jill, flies her own Cessna. For me, the whole flying business got a hefty boost that summer day at Berry Field back in 1939.
Posted by Chester Campbell at 3:36 PM

Brooke from The Bluestocking Guide said...

So you guys sneaked away for an air plane ride? That's great. I don't have any stories like that.

They work good together, Jane. But to give Greg McKenzie a little complicating twist, I made him very nervous about flying, even though his wife has a commercial pilot's license.


Right, Brooke, I was one of those "nice boys" they used to talk about. But we sometimes did sneaky things.

Memories! This gave me a laugh, Chester.

I'm a late bloomer when it comes to planes. I was middle-aged when I took my first plane ride, a United flight from Fresno to NYC, and from there an Air France B-707 to Paris. I spent the night looking out the plane window and thinking about Charles Lindberg making that trip in the flimsy little plane I had seen hanging at the Smithsonian.