Protags...who are they and where do they come from? 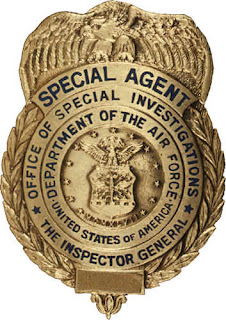 There's a thread running around the mystery lists currently about physical and other attributes of protagonists. Some writers leave physical descriptions to the imagination; others go into great detail to paint characters in unmistakable terms. It got me to thinking about my own private detectives, what I say about them and where it all came from.

The first one I created was Greg McKenzie. I had a plot in mind for Secret of the Scroll, and it involved the protagonist going on a mission to rescue his abducted wife. I wanted someone with professional investigative experience, someone more toward my own age (though not quite that far--I was 73 at the time). Falling back on my own experience, I made him retired Air Force and of Scottish lineage. I had been in intelligence rather than criminal investigation, so I made Greg a former Office of Special Investigations agent.

When it came to physical characteristics, I chose to make him larger than me, five-foot-ten, and on the hefty side. I've made his struggle with keeping the weight down a constant problem through the series. It provides opportunities for wife Jill  to needle him on occasion. In the first book I had him going through the throes of giving  up cigarettes, backsliding as events closed in on him.

When I started writing this post, I looked back into my directory and found a March 6, 1999 file titled BACKGROUND. It contains this bit of description, some of which has never made it into the books:

"Gregory McKenzie was born in St. Louis in 1935. His father, Clyde, was a burly, garrulous, red-faced Scotsman who was a master brewer for Anheuser-Busch. And since he took his stature more from his smaller mother, Greg had grown up almost in awe of this jolly giant who was fond of quoting Bobby Burns in butchered Gaelic. What he had learned from his father was that being assertive was a major part of being a man. It had not always stood him in good stead.

"Greg was in Air Force ROTC in college, where he majored in political science. His elective courses varied from statistics to archeology.

"Martha McKenzie had some Highland blood in her from her mother’s side of the family, so Greg proudly claimed his Scottish heritage. In fact, at one point he had seriously considered learning to play the bagpipe. But when he was at the point of joining a class, the Air Force transferred him 3,000 miles away.

"Jill was a bit more reserved than Greg, and she wasn’t the demanding type. But whenever she put her foot down firmly, he knew better than to try and budge it. After he retired, Greg told her if he was going to be an RV vagabond, he should grow a beard. She quickly retorted that no man with a beard was going to sleep in her bed. He didn’t really think she would kick him out of bed, but he knew she was capable of it. He recalled that she had complained occasionally that he scratched her face when he kissed her before shaving. He quickly abandoned the idea of a fuzzy face."

I added this to his colorful background later, most of which appears is a book or two:

"Greg is descended from a long line of Scottish military men. It started with the first muster of the 98th Argyllshire Highlanders in 1794 at Stirling Castle, north of Glasgow. Sixteen McKenzies answered the call. Greg’s grandfather, Staff Sgt. Alexander McKenzie, was a member of the 1st Battalion, Argyll and Sutherland Highlanders Regiment, a descendant of the old 98th. He fought in the Boer War in South Africa and in Europe during World War I. A battle wound forced his retirement and led to his emigration to America when Greg’s father was fifteen."

Creating characters with all their imperfections and strengths is one of the more fun parts of fiction writing. I'll take up some of my other creations, particularly Jill McKenzie, in future posts.
Posted by Chester Campbell at 1:57 PM