I'm taking a trip down memory lane this weekend. It goes back sixty years to the middle of 1950. If you were around then, you probably remember that year's most significant event was the invasion of South Korea by the Democratic People's Republic of Korea, better known as Communist North Korea, run by ruthless dictator Kim Il-Sung. It was the year following the end of the Berlin Airlift. The Cold War was just heating up. 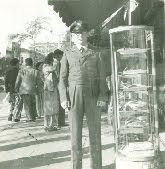 I was commissioned a second lieutenant in the Air Force Reserve on graduation from the University of Tennessee journalism school the previous year. While working as a reporter for The Knoxville Journal, I heard about the organization of an Air National Guard unit designated the 119th Aircraft Control & Warning Squadron. It would be equipped with radar as part of new efforts to control the skies over the U.S. I joined the unit as its intelligence officer, a field that appealed to me. Newspaper reporters are always eager to be "in the know." It sounded like just the ticket. (That's me at right on R&R in Tokyo, 1951.)

The 119th AC&W Squadron was a small unit of around 100 men. We met at the National Guard Armory on Sutherland Avenue on the west side of town. The radar sets were a fascinating new toy, with small oscilloscopes that featured a radius line sweeping around as the odd-looking antenna rotated. It would pick up airplanes as small dots on the screen and track their progress across the sky.

As the first year of operations wound down, we held our first summer field training exercise in 1951. As best I can recall, it took place on somebody's farm where we camped out in tents. By this time, the war in Korea had begun to require a force buildup that entailed calling up National Guard and reserve units. We knew our time was coming.

Air Guard personnel could attend regular Air Force schools, so I put in for Intelligence School at Lowry Air Force Base in Denver. I hit the road in my little Plymouth on Labor Day weekend. I had never driven that far alone, and it was a memorable journey. This was before interstate highways, and those with a U.S. designation were usually well-paved but only two lanes wide. Traffic usually moved at the speed of the slowest driver.

At St. Louis I took U.S. 40 west, which generally followed the current route of I-70. I approached Kansas City in late afternoon and saw huge buildups of dark clouds across the Missouri River in Kansas. The road soon turned dark, as did everything within sight. Kansas looked like a mass of wheat fields with no people, no houses. Then came the thunderstorms. Searing, jagged streaks of lightning slammed into the ground around me, illuminating the fields in brief flashes of light. Thunder roared like explosions echoing in the night.

I decided I'd better find someplace to spend the night. That's when it dawned on my that this was Labor Day weekend. Tourist courts, the forerunner of motels, were scarce, and those I saw had NO VACANCY signs out. When I saw a cutoff to Manhattan, I headed into the small town. There I found an old hotel with a room available. The light was a single bulb hanging from the ceiling. I took it happily and slept through the remainder of the stormy night.

I drove on to Denver the next day and checked in at the base. I finished the intelligence course at the end of November and arrived back in Knoxville just in time to go on active duty with the 119th. A few months later I was on my way to Korea and Headquarters Fifth Air Force in Seoul, my home for the next year.

I'll be recalling those days this weekend as the 119th Command & Control Squadron (a linear descendant of the AC&W unit) holds a 60th Anniversary Celebration. I'm told there will be at least two other charter members of the organization there. Plus, I'm sure, lots of other oldtimers. It should be a fun event.
Posted by Chester Campbell at 5:09 PM