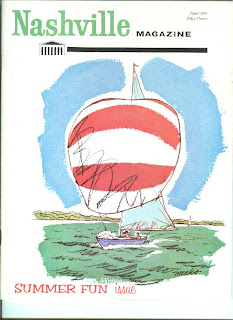 With the election of President Obama, race relations is a topic much in the news, a lot of it on the negative side. If you weren't around 40-plus years ago, you may not be fully aware of the great amount of progress we've made in less than half a century. Back in January of 1963, I started a slick paper monthly called Nashville Magazine. I wrote an editorial feature in the back of the book titled "Loose Ends." Reprinted below is what I wrote in the June 1963 issue. Nashville is a much different place today. (NOTE: Negro, which is the Spanish word for "black," was the accepted term for African Americans in 1963.)

AN OLD NEWSPAPER REPORTER is like an old firehorse—ring a bell and he’s off and running. I heard the bell and sniffed the smoke tonight, and I stalked the story to its end. As I write this, I have just come from what has doubtlessly been the most turbulent evening of recent Negro student demonstrations protesting segregation in downtown eating places. The situation swirled out of hand at one point and could easily have ended in tragedy, though fortunately it did not.

By the time you read this, the details will have long been written and rewritten in the press, but I will be a good while forgetting the stark picture of exploding tempers at and . As the marching Negro youths squared off before a group of pursuing white boys, someone smashed against a window of the old Loveman’s building, and a large, jagged piece of glass suddenly sailed across Union Street to crash onto the opposite sidewalk. The Negroes broke ranks, swarmed into the street around a bus, and for a few moments serious violence seemed inevitable. But the Negro leaders herded their group back into marching ranks and soon continued the chanting trek to police headquarters.

Rocks pelted demonstrators, police and newsmen in front of the and again later at the Negroes’ rallying point, on . Luckily, only one Negro boy was injured, and he not seriously.

As I followed the events of the evening, strolling along with the crowds, listening to comments of both whites and Negroes, I gained several disturbing impressions. First, the “student non-violent movement” is inappropriately named. Casting a group of high-spirited youths into an emotionally charged atmosphere where close contacts are inescapable is hardly a move calculated to produce “non-violence.” I watched the Negroes jostle white patrons of the B&W Cafeteria in attempts to squeeze inside the doors.

The violence that took place, however, can be laid mainly to young white toughs— teenagers and some not far out of their teens. Without their provocations, the Negroes would have doubtlessly marched and sung in reasonably good order.

But my most distressing observation concerned the magnitude of the entire affair. It produced a bold, two-line streamer in one of The Nashville Banner’s few evening extra editions in recent years, and it sent hundreds of words and scores of photographs around the world via facilities of the wire services. , which had been peacefully progressing in race relations since the violence that marked the initial steps in school desegregation six years ago, had been dealt another black eye in the face of national and international opinion. And yet who was involved? Here’s who:

• A group of Negro college and high school students, no more than 150 at the outside.

• An unorganized cluster of white youths spoiling for a fight, certainly no more than all.

That was it—barely seven-hundredths of one per cent of the population of Metropolitan Nashville. It was a striking demonstration of how the acts of a few can markedly affect the reputation of an entire area. I am sure the Negro students who took part in the march (many of whom were not Nashvillians) had no concern for what damage their actions might do to the city. They were fighting for a deeply-felt principle, for the right to go where they pleased, to hold their heads high and to be accepted as worthy as the next man. The misguided whites who hurled rocks and curses demonstrated an intelligence sufficiently meager to rule out any prospect that they might have realized the disgrace their actions would bring to their city.

And so the problem falls back upon us, upon we who do care about what happens to Nashville, we who do care about our city’s reputation and the blemishes upon it that show to the world. It will not be sufficient merely for the mayor to appoint a bi-racial committee to probe for areas of agreement between whites and Negroes of intelligence and good will. The solution, to my way of thinking, must lie in a full realization that Nashvillians of all colors and creeds must learn to live together side-by-side, to respect one another as individuals—not as members of this or that group, and to work toward the common goal of building a happier, healthier, more prosperous community. If this sounds trite, so be it. "Freedom” is a rather well- worn expression, but has lost none of its luster for all its use.

I came away from the demonstrations tonight aware that both sides in the controversy must disabuse themselves of some past notions. The whites, for instance, must realize there is no such thing as the Negro’s ill-defined "place.” And the Negroes, for their part, must learn to accept the fact that first-class citizenship demands first-rate civic responsibility, which includes a concerted effort to maintain law and order rather than bend it to one’s purposes.

So there you have it, the story of an evening which made struggle with her conscience. Not the factual, objective account of a long-time newsman, but a thoughtfully considered, editorialized appraisal of one who saw his city shamed and wondered why.