Books by the Bundle 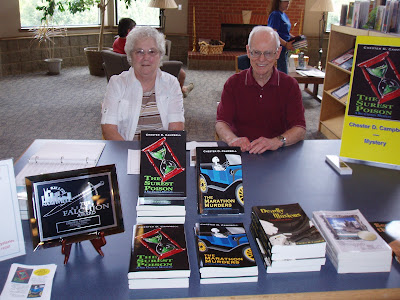 I manned a table at a small rural church's Fall Fest last Saturday, displaying all five of my mysteries. My long-time writers group colleague, Beth Terrell, took part for half of the day, then left for a bookstore signing. This time of year in Nashville usually brings mild weather, with highs in the middle 60s to the 70s. Saturday was an exception. The mercury grudgingly inched into the 50s. A stiff wind blew acres of graying clouds overhead, leaving us huddled in our jackets to keep warm.

There were half a dozen other exhibitors, including one with two tents filled with all sorts of bric-a-brac. The sun finally peeked out after noon, but the hoped-for crowds apparently stayed inside and watched football games on the tube. The church was Scottsboro United Methodist, where my wife, Sarah, had attended as a girl, and she enjoyed chatting with old childhood friends. Several of them had already read my books.

As it turned out, the day was not a dud because of a simple trick I had learned from somebody on one of the online lists I read. It may have been Rob Walker. The idea is to display your series books in a bundle, which you offer at a discount. I had my four Greg McKenzie books tied together with a ribbon and offered at $45, a 25% discount from retail.

Two people, one the Scottsboro pastor, bought book bundles. Other than that, I only sold two books, but the bundles made the day worthwhile. I've done the same at several other selling venues. I highly recommend it if you have several books in a series to market.

Without a lot of customers to disturb me, I had lots of time to think about what it means to be a "selling author." Some writers think their job is just to sit at the computer and write. I wouldn't mind doing that, but it would mean all that work produced nothing but words on the screen. I write for the enjoyment of it, but I also enjoy having others read what I write. For that to happen, I must get our there and promote.

It's always nice to have someone stop by at a signing and say, "I've read one of your books and really like it." Sure beats those occasional characters who look at the flyers my wife hands out at the bookstore entrance and say, "Who's he? I've never heard of him."
Posted by Chester Campbell at 10:09 PM

Chester, I remember you mentioning your church's fall fest before. Are your books REALLY clean and Christian based? I thought about our church's fall fest, which was just last week, but while my non-fiction would fly (it's already in our church bookstore) I don't think my YA series is pure enough. Inspirational in nature, but not Christian fiction.

No, Diane, my books wouldn't pass the test for a Christian publisher, but they go light on the profanity, have only humorous mentions of sex (between husband and wife), and don't involve gore. One mystery bookstore owner says she loves my books because she can offer them to any customer.