I spent last weekend at Killer Nashville, the mystery conference co-sponsored by chapters of Mystery Writers of America and Sisters in Crime, in cooperation with American Blackguard Film & Television and Clay Stafford, the originator. It was large enough to provide something for everybody, but small enough that most of the participants got to know each other.

The highlight of the event for me was the Saturday night dinner, where various awards were presented. One of them was The Silver Falchion Award, for the best book by an author attending the conference. It was voted on by the registrants. A lot of great books were nominated, so I didn’t count on being too successful. Lo and behold, the winner was announced as:

Chester Campbell, for The Surest Poison

The plaque displayed here is not the real one. The ballots weren’t counted until five o’clock that afternoon. After receiving the award, I had to give it back so my name could be engraved on it. Photos were made of the event, but I haven’t received one yet.

Another award was presented to my good friend and writers group colleague Beth Terrell, who also blogs with me at Murderous Musings. Beth received the Magnolia Award from the Southeast Chapter of Mystery Writers of America. It is presented annually to a member who has demonstrated outstanding dedication and service to the chapter. Beth has gone above and beyond the call of duty to help plan and coordinate programs for Killer Nashville.

Another great feature was TBI Special Agent Dan Royse's crime scene, featuring a murder in the hotel boiler room. Registrants had the opportunity to visit the scene, check out all the forensic evidence, and complete a report identifying the murderer and how it happened. Lee Lofland said it was the most realistic crime scene he had encountered. 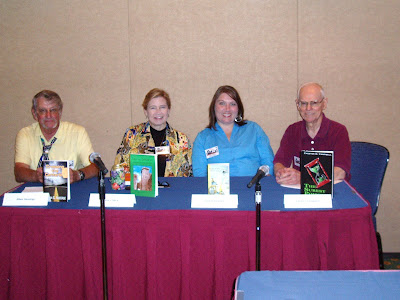 I served as moderator for two panels, one on Creating Depth Through Character Relationships, the other on A Writer’s Guide to Building Buzz. The panels ran nearly an hour and a half, giving plenty of time to cover the subjects.

A major feature of the conference was two sessions on Saturday afternoon that involved an interview and a solo presentation by J.A. Jance, author of 15 J.P. Beaumont books, 8 Joanna Brady books and 2 standalone thrillers. She did a great job. Then when she was presented her Killer Nashville Guitar as Guest of Honor, she sang a country song she’d written.

I highly recommend everyone attend Killer Nashville in 2010. It’s August 20-22 at the Cool Springs Marriott. See you there.
Posted by Chester Campbell at 2:01 PM

It sounds like a great conference, Chester. And congratulations on the great award. Man, I'd put that award somewhere front and center in my house!

Hi Chester,
We haven't really "met" yet, but congratulations to you. How lovely for you.
Karen Walker

Thanks, Helen and Karen. It was a fun conference.

Congratulations, Chester! Nothing is more rewarding than recognition from your peers.

Bravo, Chester! I'm very happy for you and the award is well-deserved. Sure wish I could have been there. Maybe next year.