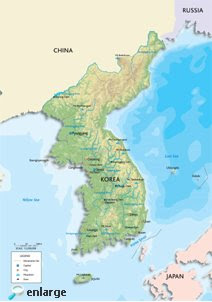 Today is Nostalgia Thursday. I’ve been looking through a packet of old Air Mail letters (remember air mail—the envelopes have alternating red and blue stripes around the edges?) that I sent home to my fiancee from Korea. The first one was written “about 300 nautical miles at sea” on Friday, May 9, 1952. We had shipped out of San Francisco the previous day, which would have been a Thursday 57 years ago.

The letter starts out:

“I’m writing from the forward sun deck of the USNS Gen. W. F. Hase, located according to my calculations as above. The sun is beaming down brightly from about 15 degrees to the left of directly overhead. Sitting here it feels very warm, mainly because I’m sheltered by a bulkhead that comes up about even with the top of my head. The wind is flapping the paper around in my typewriter. It’s pretty cold if you stand where you catch the full force of it. I’ve got my blue pants and jacket on, plus my topcoat. I’m writing from a half-reclining position in a deck chair.

“This is about the bluest water I ever hope to see. Hm, the PA system just clanged five bells, which means 1030. The ship is rocking gently, the water isn’t very rough, not so bad as it was last night anyway. I’m looking toward the aft (rear) of the ship, and there are a few little shaggy cumulus clouds around the horizon. I can’t see directly behind because of a stack of life rafts and part of the superstructure, but a little while ago there were two albatross (or albatrosses) flying around back there. We lost the sea gulls last night. They don’t fly out too far. The albatross, if you remember, is what not to shoot unless you want to end up like the Ancient Mariner. Personally, I got nothing to shoot one with anyway.”

I wasn’t issued a gun until I got to Korea. A bulky Army .45. I carried the thing for a year and never fired it. Stationed at 5th Air Force Headquarters in Seoul, I couldn’t find much to shoot at. The rats weren’t all that big. I’m copying the letter as written, without any editing. I wasn’t concerned with writing style at the time. I had been working for a newspaper the past four years, and we had a copy desk to take care of editing chores. My letter continued:

“To get back to the beginning, we departed from Camp Stoneman yesterday about 8 a.m. I didn’t know for sure whether we were going anywhere or not at first, for we got on the bus and it promptly broke down. So they loaded us onto another one and took us a couple of miles over to what anybody else but the Army would call a ferry—they call it a “harbor boat.” There were two “harbor boats,” the Yerba Buena and San Leandro. The Air Force officers went on the former, with the latter all Army. Boy, I thought my arms would break off before I got to set down my bags. I figured I’d die before carrying them onto the ship, but luckily they had stewards to do that for us. Anyhow, the harbor boat took us down the river to San Francisco Bay, past Alcatraz where I took a picture, on over to Fort Mason, which is the Army docks at Frisco. There we found the Hase, the Red Cross with coffee and cookies and an Army band to serenade us as we left. Some of the other guys who’ve been over before say this isn’t a very big ship, but it’s the biggest I’ve been on anyway. I don’t know how many are on it, though I’ve heard around 3000. They say it carried as many as 6000 during the war [World War II], but I imagine they were pretty crowded. The officers have cabins, mine with 9 guys in it, some have 12. They are triple-deck bunks, and I got a lower. I slept very well last night. The troops are in compartments down below decks, I haven’t seen what sort of place it is. Each cabin has a wash basin, and there is an adjoining toilet and shower for each two cabins.”

The letter, typed on paper about the size of a trade paperback, is 16 pages long. It is written in continuous form with break headings to show the date, time, and approximate location for each entry. The last one shows “Thursday, May 22, 1952, 6:30 p.m., Approx. 200 miles from Japan.” I wrote it using the small, thin, metal-cased portable typewriter I wagged around the Far East. Unfortunately, I got rid of it a few years later. It would have been a nice antique now. As is the camera I took along, a boxy twin-lens Ciro-flex, which I still have.

The rest of this first entry in the letter didn’t include much excitement. Stuff like one of my cabin mates breaking out a bottle of Four Roses, which he proclaimed was “seasick medicine.” Liquor was forbidden aboard ship, of course. As was a lot of other things that went on. At one point during the day, the ship turned and the emergency lifeboat crew lowered Number 2 Boat. A short time later they returned. We figured somebody saw something and thought it might be a man overboard, but they brought nothing back.

In the letter I mentioned what we had to eat for lunch (baked ham, sweet potatoes, corn, a beet and onion salad, tomato soup, coffee and cake) and dinner’s highlight (braised tenderloin tips and some great banana cream pie). The USNS Hase was a civilian ship, not Navy. The officers ate in the same dining room as the crew, and they prepared sumptuous meals. I don’t remember how much I gained during the 15-day trip, but without much activity except walking around the deck, I’m sure I put on several pounds.

That first letter was postmarked May 24, 1952. I put two six-cent air mail stamps on it when I mailed it on arriving in Japan. I wrote “Free Air Mail” where the stamp would have been on the other letters, which came from Korea. I’ll do some more reminiscing about the Korean War on day soon. Stay tuned.
Posted by Chester Campbell at 10:02 AM

I’m a member of the new blog tour class. I found your website through that group, cruised it, and enjoyed it. Thank you.

I popped over to your blog today to see what you were up to and found your most interesting post. I’ve been wanting to comment on one of your posts, if nothing more than as an excuse to say hi, and this one seemed tailor-made.

It’s especially appropriate because I’m a retired Army officer who spent considerable time in Korea, though it was in the mid to late 1970s. That tour had such an impact on my life, I incorporated much of it into my first novel, originally published in 2001. That publisher went out of business. The book was recently picked-up by Zumaya Publications and will be on the street again sometime late this year or early next.

So, not only do I enjoy your site, your work, and your blog, we have a bit of a connection as well.

But, pumping my book, or BSB, (Blatant Self Promotion) is most certainly not why I’m here. Just wanted to say hi, and, given the day’s topic, recommend a book about the Korean War, “The Coldest Winter,” by the late historian and journalist, David Halberstam. http://tiny.cc/oeU2s

Well, that’s about it, Chester. Enjoyed the chat. Best of Luck,

I really enjoyed reading this and even though you mentioned your letters at the time were unedited, I thought they were written really well.

The image of you carrying your typewriter around is a wonderful one. I also had no idea the meals were so good.

Thanks for sharing such an incredible memory!

Sadly, with today's methods of communications there won't be many wonderful letters like these for future generations to enjoy. I have a stack of letters my father sent to my mother during WWII - I haven't been able to bring myself to read them - yet - but I'm so happy to have them.