Handicaps are what we make of them 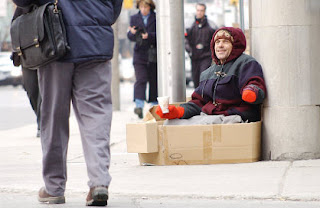 I'm a pretty upbeat guy, but once in a while I fall into the trap of bemoaning some problem that just doesn't seem fair. Like this chronic cough I've had since the early seventies. It got gradually worse over the years and now bugs me constantly. Various doctors have suggested remedies that don't work. Along with a nasty sinus drainage that makes me clear my throat constantly (and no doubt is part instigator of the cough), it has ruined my vocal chords to the point I speak with a gravelly voice, when I can speak at all.

Then I look around at some of the folks I encounter and realize I've got nothing to complain about. There's a couple at church named Nathan and Shirley who are always smiling and laughing and full of friendly banter. He is blind in one eye and has quite limited vision in the other. She has been blind almost from birth.

Does it bother them? You'd never guess from being around them. Nathan works for the Red Cross blood program, travels around speaking at schools and to other groups. Somebody else drives him, of course. He uses a white cane with a red stripe, but he can see well enough to get around without running into anything. He can read by holding the paper just in front of his eye, or by using a magnifying glass.

His wife, Shirley, has worked in a state office for years. Their home is a marvel of gadgetry. They have all kinds of devices that talk to them. She knows exactly where everything is and can move about with no help. When she sang in the choir, she printed out the songs in braille and read as she sang.

Whenever you see her sitting around waiting for something, she usually has some project in her lap and is knitting away.

Except for needing help with transportation, they are about as independent as anybody I know. I've never heard them complain about their handicap. Occasionally they joke about it. Makes me feel like a first class wimp to even mention my cough.

A young boy of our acquaintance, he's probably eight or nine now, was born with one side of his mouth twisted up and the inside not fully developed. His mother home schooled him to avoid the trauma of what other kids might say. He has always been a smiling, happy kid. Now that he's old enough, he is undergoing a series of operations to correct the problem. He's looking a lot better. Despite what he's been through, he still smiles like a trouper.

When we write mystery novels, we give our characters a background of problems to make them more believable and worthy of sympathy. Sometimes it involves physical handicaps, at other times it's mental or emotional. We often have them brood over their troubles or afflictions, but it's best to give them a little humility and let them realize as bad as things are, lots of people have it worse.

Characters who show the spunk to rise above their difficulties are the ones we like the best. Right?
Posted by Chester Campbell at 9:30 AM

Good post, Chester. I do try to remind myself that there are many successful people whose lives are so much harder than mine - still I can get a bit whiny when things go wrong.

I agree, Jane. Sometimes it's hard to keep a stiff upper lip.