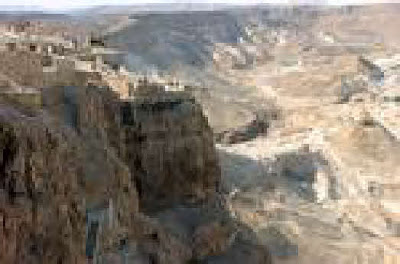 A recent news story about new findings from King Herod’s burial site in Israel brought back memories of my trip to the Holy Land in 1998. We visited the impressive construction projects Herod the Great built in the port city of Caesarea and atop the famous mountain fortress of Masada.

Being a mystery writer, though not published at the time, I viewed most places on the trip with an eye to how they might be used in a novel. I had bought a camcorder just before heading to the Middle East and took about three hours of videos during the tour.

Traveling by Royal Jordanian Airlines, we flew into Amman and spent a day cruising by bus through the mostly desolate Jordanian desert to visit two interesting sites. We stood on Mount Nebo where Moses gazed across the Jordan River before his death. Then we toured the ancient city of Petra, made famous by one of its striking building fronts, carved out of rose sandstone, being featured in the climax of Indiana Jones and the Last Crusade.

Our first taste of the dichotomy between Israel and its neighbors came as we approached the Allenby Bridge over the Jordan River. It’s called the King Hussein bridge on the east side. We had to leave the Jordanian bus and board an Israeli bus for the crossing.

Jericho provided our first taste of the Promised Land, the same as Joshua in the Bible. Billed as the world’s oldest and lowest city (820 feet below sea level), its ancient tel, or archeological site, has been peeled back to reveal 26 layers of civilization dating back to 8000 B.C. Heading on to the Holy City, we checked into our hotel in East Jerusalem, the Arab district.

Our savvy Nashville travel agent, who joined us on the tour, booked us through a tour company run by two Palestinian brothers (who, incidentally, attended the University of Tennessee). He said we wouldn’t have any trouble in the Palestinian territories as they knew the bus was owned by Arabs.

For the next few days, we shuttled around various Jerusalem sites, plus Bethlehem, the Dead Sea Scroll caves at Qumran, the Dead Sea shoreline, and Masada. We were advised to steer clear of the West Bank hotbeds of Hebron and Ramallah. We visited such fascinating spots as Hezekiah’s Tunnel, dug 1,500 feet through the rock from both ends at once in 700 B.C. We also toured the Shrine of the Book, which houses the Dead Sea Scrolls; Yad Vashem, the Holocaust museum; the Temple Mount with its striking Dome of the Rock; the Church of the Holy Sepulcher, built on several levels and occupied by several different religious orders.

One of the more interesting stops was an Arab market filled with small but colorful shops. We had to stop and try the Israelis' favorite fast food, a falafel (spiced chickpea fritter) tucked into pita bread.

During the next week, we traveled north through Samaria, with a stop at Jacob’s Well, heading into the fertile Yizreel Valley. We visited Mount Meggido, called Armageddon in Revelations, walking among the ruins, including a trip down 183 steps to see the historic water tunnel. Then it was on to the Sea of Galilee, where we stayed in Nazareth. We sailed on the sea in a fishing boat allegedly like the one Jesus rode in. They dipped in a net, but it came up empty.

We toured biblical sites around the Galilee, also known as Lake Kinneret, including the Mount of the Beatitudes, Capernaum, and churches dedicated to various incidents such as the multiplication of loaves and fishes. We visited the attractive Kibbutz Ein Gev and traveled up the steep slopes of the Golan Heights to an old attillery emplacement looking down over the kibbutz where Syrian gunners fired on the Israeli settlers.

Our tour began to wind down with a visit to Mount Carmel, where Elijah vanquished the priests of Baal. Then we headed for Israel’s third largest metropolitan area, Haifa. The hillside Baha’i Shrine and Gardens provided a striking panorama, as did a view of the Haifa port. Afterward, we headed south along the Mediterranean to the historic city of Caesarea, built by King Herod.

At the outdoor Roman Theater, our guide stood on the stage and showed how a normal voice could be heard all around the seating area. We also checked out the ruins of Herod’s hippodrome, which had seating for 20,000 people. Then we toured the remains of the king’s port, now part of the Crusader city. Just beyond this stood a Roman aqueduct built in the A.D. 100’s. It had steps leading up so we could walk along a section of the monstrous project.

After overnighting in a seaside hotel at Netanya, we headed into Tel Aviv, the country’s commercial center. Our final stop was the old port city of Jaffa on Tel Aviv’s south side. Old Jaffa had a special attraction for me, with its warren of stairstep streets through the reconstructed ruins of Turkish palaces, flanked by pastel colored artist’s studios, galleries, and outdoor cafes.

In fact, the experience led me to open the first chapter in Secret of the Scroll, my initial Greg McKenzie mystery, in Old Jaffa.

On our flight home from Amman, I read in the Royal Jordanian magazine about an archeological dig at Bethany in Jordan, the area where John the Baptist preached. It mentioned finding caves that had been occupied by monks in the early centuries. I thought what if someone found an ancient scroll in one of those caves. After I got home, it quickly developed into a plot. Happily, I had my videos to help out.

I used much of my travel experience to tell the story, sending Greg and Jill McKenzie on an identical trip. Many of the locations appear just as they did to me. It was a classic example of using your travels to create a mystery. You can get a feel for it by reading the opening chapters at my website.
Posted by Chester Campbell at 12:02 AM

Interesting post and great pic. Wow to see it in person!

Stop by the blog tomorow for a new tag you're it game. (blame Helen. ha!)

Masada was something to see, Chris. We rode a cable car to near the top, then walked the remaining 80 steps. You have a terrific view of the Dead Sea and surrounding countryside. Herod's living quarters occupied a couple of levels hewed out of the mountainside.

That photo itself would be a good backdrop for a mystery. Awfully tempting to have someone go over that cliff into those raging waters below.

I think it's neat how you approach your travels in regards to your writing the same way that filmmakers: always with an eye out for a neat place to set a scene.

Photos and videotape provide good reminders of places that might fit into a plot. I haven't used them as much lately, since I've been keeping my characers close to home.