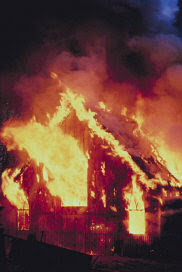 Last night we had an arson investigator with the Nashville Fire Department speak at our Sisters in Crime Chapter meeting. He had lots of interesting info. Perhaps one of the most significant observations was that the crime of arson is quite difficult to prove unless someone actually sees the fire being set.

He told of a case where the perpetrator had served time for arson in another state and had been arrested for it in a third. There were indications the man had been around the scene, but no one saw him. They found a lighter fluid container in a nearby garbage can that had his fingerprints on it.

But, as the investigator said, how are you going to prove he didn’t just walk by, see the can, be a good citizen, and throw it in the garbage?

Arson investigators respond to every fire except burning automobiles. Those don’t leave enough to deal with. The exception is if there’s a body inside. Then the fire investigator works with police detectives.

He said most arson cases involve stupid things like getting angry at a spouse, dumping their clothes on the bed, and setting them on fire.

He talked about how fires develop, going upward and toward the best source of oxygen. He showed us a large book titled Guide for Fire and Explosion Investigators, known as NFPA (National Fire Protection Association) 921, and said it was the best source of information on the subject.

The investigator’s first and primary job is to determine the origin of the fire. This is usually done by tracing patterns made by the flames moving away from the site of ignition. A knowledge of building materials and how they burn is necessary in the tracing of the fire’s progress.

Discussing fires in general, he mentioned the three elements necessary for a fire to start and continue to burn – fuel, heat, and oxygen. It was called the Fire Triangle until they added the element of chemical reaction and now call it the Fire Tetrahedron. He mentioned that you could put out a match by sticking it into a pan of gasoline, so long as there was no vapor present (as they say, don’t try this at home).

If you want to read a good book about arson and its investigation, he recommended Joseph Wambaugh’s Fire Lover, which chronicles the career of the worst arsonist in U.S. history. He was a former fire captain and fire investigator named John Orr, who worked for the Glendale, CA fire department. He is believed to have set more than 2,000 fires and is currently serving a life sentence in a California prison.

The investigator said two of the main causes of fires he investigates are space heaters in the winter, usually left too close to flammable objects like drapes or bed linens, and clothes dryer spontaneous combustion. Particularly in gas dryers, which get quite hot, towels left in the dryer will begin to smolder, then break into flames.

“I never leave the house or go to bed with the dryer running,” he said.

One subject he dealt with humorously was the necessity for the investigator to restore the scene to the way it looked when the fire started. The problem, he said, is that firemen like to break windows and throw things out.

“I have to carry everything back inside,” he said. “It’s hard to get a sofa back upstairs by yourself. Sometimes I make them help me.”

Carelessness is a major cause of fires. He told of one case where workmen needed some parts and removed them a natural gas connection in a utility room at a motel. It allowed the gas to escape and build up in the closed room. After the manager saw the men leave, he decided to go see what they were doing. He opened the door, flipped the light switch, which produced a spark that touched off a gas explosion.

He was thrown back from the door, badly burned, and died a few weeks later.

In the case of a home fire, the investigator noticed cigarette lighters and matches lying all around. He asked the owner what happened. The man said he had no idea. He came in and found the place on fire, looked for his son and found him on his bed crying. As expected, the boy admitted playing with a lighter.

“After watching their parents use those things. The kids are curious as to how they work.”

The investigator said in his opinion the number one cause of fires was stupidity.

For a different look at an explosion and fire, check out my new book, The Surest Poison. Read opening chapters and ordering information here.
Posted by Chester Campbell at 9:31 AM

Wow that sounds aemwesone. I never knew any of that stuff about arson. But now that I think about it, I don't recall seeing a lot of prosecution for arson.

Chester, this is an excellent post. I'm reminded of a woman in the town I grew up in whose face had been horribly disfigured when she opened the door between her kitchen and cellar stairs. Apparently, gases ignited just at that moment.

Sounded like a fun program. I do remember hearing somewhere that the origin of a fire is of primary importance, which makes sense. How else can everything else be figured out if you don't know where it got started?

Sounded like a fun program. I do remember hearing somewhere that the origin of a fire is of primary importance, which makes sense. How else can everything else be figured out if you don't know where it got started?

It was a great program, and the guy was quite candid, which is why I chose not to identify him. He started off saying, "Are there any lawyers in the room?"

What an interesting article. Thanks for sharing.

I'm on an arson watchlist. Tru story. The church where my theater group was performing one summer burned down after a show. They think someone left a curling iron on, but it's gone in all of our "permanent files". Personally I think it was just a bad choice to perform Gypsy, Little Shop of Horrors, and Godspell in church.

Great stuff, Chester. My secondary hero is a fire investigator in Honolulu, so I've been reading a lot about arson-- but I learned even more from your post.

Glad you found something of interest, Neil. See you in a couple of weeks at SleuthFest.