Why things happen in mysteries 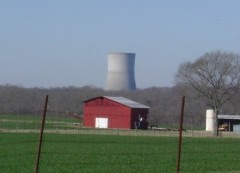 I suppose things happen in fiction as in life, the result of random choices made on the spur of the moment. I was reminded of that yesterday when I made a talk to the Trousdale County Historical Society in Hartsville, TN.

It was an interesting group. About twenty-five people came out on a cold rainy afternoon to listen to a mystery (not history) writer. Why Trousdale, the smallest county in Tennessee with only 7,700 residents? That's the result of one of those random choices.

Incidentally, the photo above shows one of the county's main claims to fame, the abandoned cooling tower for the Hartsville nuclear power plant, the $12.3 billion project TVA scrapped in 1982.

When I started writing The Marathon Murders, I had only a basic plot idea in mind. Back in 1914, when Nashville's Marathon Motor Works went into bankruptcy, a company official disappeared and was accused by his boss of embezzlement. Now, 90 years later, documents are found during restoration of the defunct company's plant and administration building that may show the accused man was framed and murdered. His great-great granddaughter hires PIs Greg and Jill McKenzie to recover the documents, which have gone missing.

I had used a Metro Nashville homicide detective as Greg's main police contact in previous books, so I decided to do something different this time. On every trip downtown, I always passed an impressive building that housed the Tennessee Bureau of Investigation. Why not use a TBI agent in this book, I thought?

I knew little about the TBI except that they worked mostly with county sheriffs and small town police forces that lacked the expertise to tackle major crimes. So I started looking for a small county not far from Nashville. That's when I found Trousdale, only 35 miles away, was the ideal candidate.

I put the contractor who possessed the long-lost documents in the small county, and as fate (and the muse) would have it, arranged for three murders to be committed there.

It had been a couple of years since I finished writing the book, and I hadn't really thought about the way it had happened until a lady in the Historical Society asked how I came to use Trousdale County in the book.

I had been a bit concerned when the organization's president invited me to speak, since I barely got into the county's history in the book. But it turned out many of the members were avid mystery readers and they asked numerous good questions. They also bought books.

Before I left, they told me about a famous unsolved murder in the area and invited me to come back anytime and set some more mayhem in the county. I received a copy of The Hartsville Vidette, their small weekly newspaper, and the editor, who took pictures during my talk, promised to write a story about another of my books next week. Happily for me, another random choice.
Posted by Chester Campbell at 3:49 PM

Hey Chester, it was nice of those folks to invite you to create more fictional mayhem for their county. It sounds as though you have a ready-made audience for your next book.

That's awesome it turned out so well! Sometimes it's the small efforts that yield the best results. Besides, you never know the ripples from this one visit!
I go to every event prepared for something great to happen - right then or as a result!

Bob, Diane, Joan, thanks for the comments. It was a great group. As you might expect for a historical society, they were mostly older folks, who are the ideal audience for my series.

Great company to keep for what you do, Chester.

Sounds like a very profitable day spent! Glad it worked out so well for you. It's giving me some ideas, too.