Designed to Kill Is Free Today

If you're new to retired Air Force investigator Greg McKenzie, and his wife, Jill, here's your chance to get started for free. Today (Saturday, Sept. 14) through Monday (Sept. 16), the second book in the series, Designed to Kill, will be available in ebook format for the Kindle at no cost.

Don't have a Kindle? No problem. Download the free version to your Windows computer or tablet, Android phone or tablet, iPhone, iPad or MAC, Blackberry or Windows phone. Just go to the Free Kindle Reading Apps Page and pick your device. 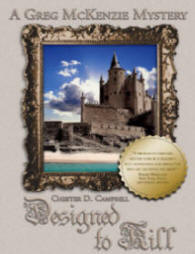 Designed to Kill is a tale of greed that leads to murder. It involves a high-rise condo on the beach at Perdido Key, Florida designed and engineered by the son of Greg and Jill's best friends from the first book in the series, Secret of the Scroll. A party in the 15th floor suite celebrating completion of the project ends abruptly when the balcony falls, killing two celebrants.

The investigating sheriff's officer tells Tim Gannon his balcony caused two deaths. The next morning Gannon is found dead of a gunshot wound at the nearby Gulf Islands National Seashore. The deputy says "suicide" and the medical examiner agrees.

Tim's dad, Sam Gannon, Greg's best friend, disagrees. He asks Greg to go down to Florida and find out what happened. As Greg digs into the case, assisted by Jill, he finds lots of disturbing facts.There are plans missing, an obstinate contractor, a too-slick developer, and an inspector angry over a disrupted love affair.

When Mafia goons rough him up, Greg realizes it's time to target a murderer. But who? Jill's help with the case leads to a partnership that goes through the next three books. And there's another in the works.
I
Posted by Chester Campbell at 10:03 AM