A Sporting Murder, the fifth novel in my Greg McKenzie mystery series, will be free to download for the Kindle tomorrow (April 8) through Wednesday. If you enjoy a good, rousing whodunit, this one is for  you. The plot revolves around a reported plan by local businessmen to bring a National Basketball Association team to Nashville. This greatly upsets a group of dedicated Nashville Predators' hockey fans who feel it could be the death knell for their sport. 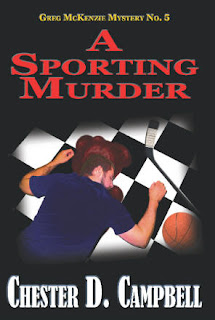 When rumors of shady dealings involving the NBA plan surface, the group's lawyer hires PI's Greg and Jill McKenzie to investigate. A potential informant is promptly murdered. The book has several good reviews, but one I particularly like is that of veteran reviewer Sylvia Cochran, who wrote:

"Campbell knows how to spin a good yarn, and it shows. There are the murderous plot involving the NHL team and the engaging sub-plot of the man with a grudge. There is some back-story and some lovin'. Keeping all the balls in the air at all times, the parallel investigation makes for an exciting read, especially since there is never a shortage of action.

"The protagonists are a charming couple of seasoned professionals (not the bumbling `chick lit' characters that mystery writers of late seem to favor). They are also not the brooding private eyes with the haunting past, which make up pretty much the other half of the genre.

"Just like the plot, they are straight forward in a most refreshing way, which leaves the darker twists and turns to the plot without allowing the main characters to get in the way. The story is a welcome departure from recent genre pieces, which automatically turns A Sporting Murder into a must-read."

You'll find the book for the Kindle at its Amazon page. It will go free at midnight PDT.
Posted by Chester Campbell at 1:10 PM