Spring on the Way

I needed to look up something recently in my files of Nashville Magazine, which I edited from 1963 to 1969. In reading through several issues, I came across my last-page feature called "Loose Ends" in the February 1964 magazine. With all the weird weather we're having now (including snow flurries this afternoon), I thought the article, written one month past forty-nine years ago, made to order for the current situation. As you'll see, my writing tended to be a bit more poetic half a century ago. 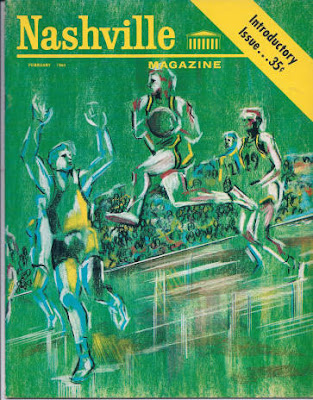 IT WAS A SOGGY, gray winter morning as I drove into town, along streets lined like a football field with the thin shadows of light poles reflected on the pavement. The city mirrored a forlorn countenance, its colors flat, its buildings drab and water-streaked. A swirling exit from the new expressway stood chaste and deserted in the morning chill.


A ragged Negro, bent beneath the burden of his years, hobbled across an intersection, his tattered umbrella a comic foil against the rain. Traffic flowed past, tires squishing noisily through the downpour, each car tightly sealed against the outside world like a secluded island moving in the gray fog of dampness.


This was the city at its seamiest, I thought. Denuded trees, yellowed grass, slate-gray skies. Instead of open, friendly faces, the sidewalks were sparsely populated with stooped figures, their darkened faces withdrawn, shrouded against the weather. A dull, gray, wintry day. A wet, murky city. A place for introspection, a time for seeking new perspectives beyond the gray horizons of the present.


These same showers, differing only perhaps in their degree of warmth, coming a few scant weeks from now will stir this same muddy ground into a rebirth of momentous proportions. The same wan landscape will burst forth with new color, and these same downcast faces will turn upward with new brightness. For such is the magic of Spring.


It seems that all of life is geared to a similar cycle of cold, murky depths followed by the lightness and brightness of hope renewed. At least that is what makes the fight worth fighting.
Posted by Chester Campbell at 6:23 PM