Let me start by saying I'm reasonably pleased with the way my life has turned out. For sure there are things I would have changed, had I known what I know now, but I'm quite happy with the overall result. At this point, you're probably thinking what the devil does this have to do with infamy? 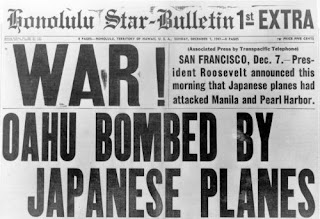 It goes back 69 years to that fateful December 7, 1941. What happened that day put me on the path that led to where I am now. It was one of those blockbuster events that cause people to recall what they were doing when they heard the news. I was riding in my dad's car, listening to the radio. It was around 1:30 p.m. when the news broke on CBS Radio (WLAC in Nashville). I don't remember if I heard the initial announcement or a follow-up. But I remember the message.

The Japanese have bombed Pearl Harbor, Hawaii. You can listen to the original radio reports at the Modesto Radio Museum website.

I had just turned 16 and gotten my driver's license. I didn't get to use the car much back in those days, and even less after gas rationing started in 1942. But like every other boy in my school, I couldn't wait to get out and join the service. My older brother was drafted after finishing his first year in college. I was only 17 when I graduated but promptly enlisted in the Army Air Corps Reserve, getting called to active duty a month after my next birthday.

In his famous declaration of war speech, President Roosevelt called December 7 "a day which will live in infamy." For me, it was a day that set the course for my life. That decision to join the Army sent me on a circuitous route around the Southeast Training Command. My final assignment was at Randolph Field in San Antonio, Texas.

While there I worked with a fellow Aviation Cadet who had studied a year at Yale before entering the service. We were talking one day about what we'd do when the war was over (it was winding down at the time), and he said if he had it to do over he'd have studied journalism. Up to that point I had never considered writing either as a hobby or a profession. But the idea struck a chord, and I decided to find a journalism school to attend.

One thing leads to another as things develop through life. If the Japanese hadn't bombed Pearl Harbor that day, I probably wouldn't have joined the Army Air Force, wouldn't have wound up at Randolph Field, and wouldn't have been steered into a writing career. So for me, that day of infamy started things in motion to produce a life that has been uniquely satisfying.

Currently I enjoy writing mystery novels and have no plans to break off in another direction. I've had a lifelong adventure with words. I tell the full story on my website in an essay entitled "Reflections on the Writing Life - my 60-year odyssey with the written word."
Posted by Chester Campbell at 9:26 PM