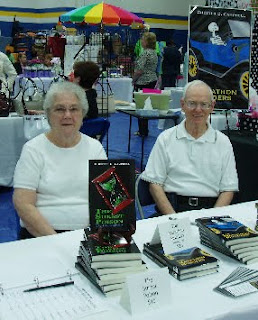 Don't you just love it when people get excited about a coming event? The toxic chemical spill that's the key plot point in The Surest Poison takes place behind a small plant just outside Ashland City, the seat of Cheatham County, just to the west of Nashville. I contacted the Cheatham County Library director a few weeks ago and asked if she would be interested in my doing a book signing there. She thought it was a great idea. We set it up for Saturday, September 5.

In the book, I had PI Sid Chance and his part-time associate, Jaz LeMieux, visit the newspaper in Ashland City to seek the editor's help. A story he runs in the paper provides one of the key clues to solving a murder. When I spoke to Brooke Mullican, the librarian, I asked if she had any contacts at the newspaper. She said the editor was a friend. I sent her a news story about the signing, mentioning the newspaper's appearance in the book.

I received an email today saying she had sent the story to both newspapers. Turns out there's another one in a nearby small town that has a larger county-wide circulation. She's also meeting with the Ashland City editor tomorrow. She asked me to send some bookmarks they can begin handing out to library patrons next week.

I don't do much public speaking any longer because of a vocal chord problem, but I enjoy talking with people about my books at signings. I haven't done many pure signings at libraries, but the few I've done have gone well. The Southwest Branch Library at Pensacola, FL is a favorite. I did signings there for each of my books until this year. We curtailed our travel because of the economy and gas prices. I'm looking forward to going there next year, however. The Friends of the Library leaders there are great.

One of the fun parts of being an author is visiting locations where they generate a lot of enthusiasm over your appearance. The trip to Ashland City should be a delight.
Posted by Chester Campbell at 6:26 PM

Good luck, Chester! I'm sure it's going to be a great event!

Name dropping in a book certainly has advantages! Well done and best of luck on the 5th.