Some readers have commented that I must do an awful lot of research for my books. It's true, but that's a part of the job I really enjoy. I like to to do on-scene research as much as possible, though I may not describe things exactly as they appear. Since I set my books mostly in the Nashville area, I can visit sites as needed.

With The Surest Poison, I made a couple of trips to Ashland City, the setting for the chemical dump and much of the story. We ate lunch at a small restaurant that looks like a diner out of the mid-fifties. I didn't use its name but described the decor in the book as a meeting place for Sid Chance and Jaz LeMieux. 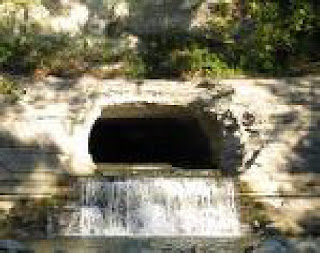 One spot near Ashland City I mentioned a couple of times is the Narrows of the Harpeth River. There Montgomery Bell built an iron forge in the early 1800s using slave labor to cut a 290-foot tunnel through limestone to provide water power. The photo shows where the water gushes out. I first saw this striking scene as a Boy Scout at the old Camp Boxwell, which was located nearby in the 1930s.

The Ashland City Times was another spot I visited and described without using the actual name. I talked with a reporter and mentioned him in the Acknowledgments. A church member came up to me after reading the book and said her grandmother and grandfather had started the newspaper. She wanted another copy for the folks in Ashland City.

Another town I used a few times is Franklin in neighboring Williamson County, one of the wealthiest counties in the nation (at least it was before the recession hit). I've been there many times but made a couple of visits to refresh my memory on a few points. I took photos of the main square, which I described near the end of the book when Sid and Jaz visit the local DA. Its main feature is a soaring stone monolith topped by a Confederate soldier. The Battle of Franklin in 1864 was one of the South's worst disasters. Six generals were killed or mortally wounded.

My only reference to the Civil War involved that lonely Rebel atop the monument. Sid mused that the soldier's lost cause was long ended, and he knew the feeling.

A body is found on page 2 of the book. I plunked it down in a spot familiar since childhood pre-WWII. The murder takes place in Shelby Park, a Metro facility that runs along the Cumberland River in East Nashville. I grew up not far from there and made many a visit in my day. They had a popular swimming pool when I was a kid. There are still ball diamonds, picnic areas, a golf course, and plenty of trees, green grass and roadways. A good place to dump a body in a rainstorm. 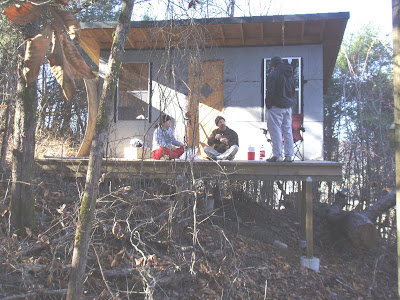 The story begins with Sid in his rugged cabin on a wooded hillside 50 miles east of Nashville. This location came courtesy of my younger son, Mark. A former Army Green Beret (though not in Vietnam like Sid), he loves the outdoors. Several years ago, he bought an 80-acre piece of property in Smith County. The community is called Pleasant Shade, but I call his place Campbell Mountain. It's a real chore to get to the top. He built a cabin near the crest of the hill, though it's not as commodious as Sid's. With some help from his two sons, seen above, he hauled all the materials up the hill via shank's mare. It included 4' x 8' sheets of plywood, 4x4 poles, and 40-pound bags of Quikrete. He has no electricity or running water. He also built a shooting range downhill from the cabin.

I find research for my novels both interesting and nostalgic.
Posted by Chester Campbell at 3:34 PM

That must've been a lot of work getting that up there!

That's for dang sure! Makes my back hurt just to think of it.

Sometimes I enjoy research, other times I find it tedious but I've never thought of it as nostalgic! Now I'm going to rethink the whole process. Enjoyed the post.

I love the research and spend too much time on it instead of writing. I enjoyed your post, Chester, having just finished reading The Surest Poison. Btw, it will be featured Friday at my Writing Advice and Good Books blog, and your interview will be up also on Friday at Mysterious People.

I know the feeling, Jean. I sometimes spend too much time at research. Glad you liked the book, though. I look forward to reading your blogs.

Wow, it must be something for your son to live off the grid like that. Indoor plumbing is one thing I'd have a hard time doing without!

He's one of those rugged individualists, Christina. Since he opened a small cafe last year, he hasn't been able to spend much time in the woods, however.