Tale of a Launch Party 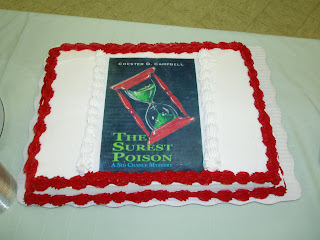 Stealing ideas is what writers do best. You’ve heard the old adage, there are no new plots under the sun, only variations of ones that have been around since some cave dweller learned to draw pictures on the wall. Well, I pilfered an idea from old friend Marilyn Meredith, who recently wrote about launching a book at her church.

A week ago Sunday, I did my formal launch party for The Surest Poison at City Road Chapel United Methodist Church in Madison, TN. Formal sounds a little too . . . formal. I wore no top hat and tails, but I did have a party cake with the book cover screen-printed in icing. This was my step-granddaughter’s idea. She and her mother handled the catering.

The only problem with a fancy cake like that is nobody wanted to cut the cover. So we ate off both ends and wound up taking the cover part home intact. We got even, though, and took it back to our Sunday School class last Sunday. It is now no more.

A launch party is something I’ve only tried with the last two books. Neither has been a big sales event. I haven’t had much luck in getting media notice. The Nashville City Paper ran a nice review but never mentioned the party. The major daily remained totally silent. I did manage to get notices in some of the online event calendars, but the only people besides church members who showed up were two fellow Sisters in Crime.

We had a nice group of friends on hand and chatted about my books and writing. One happy buyer sat to the side and made a good start at reading the book while his wife conversed with some of the others.

We sold a decent number of books, more than enough to pay for the cake and punch and cookies. I’m following up with three consecutive Saturdays of Barnes & Noble signings, so hopefully it will all wind up as a successful extended launch.

Maybe I’m not thinking big enough. The new book I’ve started working on, a fifth Greg McKenzie mystery, involves pro basketball and hockey, NBA and NHL. I could do a book launch on the ice at the Sommet Center, invite thousands of fans who normally cheer the Predators. I dunno. Somehow I think that might cost a bit more than the cake.

P.S. My blog tour for The Surest Poison ends Friday at Julia Buckley’s Mysterious Musings. All those who have left comments during the tour will be eligible for a drawing for (1) an autographed copy of The Surest Poison, and (2) the Grand Prize of all five of my books, including four Greg McKenzie mysteries.
Posted by Chester Campbell at 8:05 AM

Don't be discouraged, Chester. People don't get as excited about autographed copies & meeting the author as they used to and doing so just doesn't rate high on their list of priorities.

Cake looks yummy! It is a mystery why some signings work well and others don't. It would be nice if authors could get a little more help from the media. Good luck with your Barnes and Noble signings.

I know, Diane. I'm not an autograph seeker. I let authors sign if they're there when I buy because I know it makes them feel better.

The cake was good, Jane. I'll sell more books at church to people who couldn't make the signing. I just hope the weather cooperates Saturday for B&N.

Good luck on your upcoming signings. Too bad some folks missed out on your party!