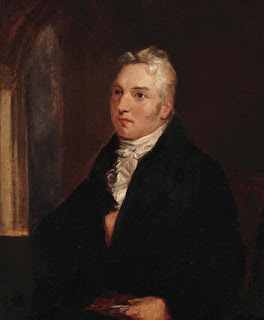 In mystery writing, we’re always talking about a reader’s willing suspension of disbelief. The term was coined in the early 1800s by English philosopher and poet Samuel Taylor Coleridge (shown a right), best known to American high school students for his “Rime of the Ancient Mariner.” The idea stemmed primarily from a desire to get readers to accept supernatural events.

We use it now mostly in the context of stretching the truth. The question is how far can you go in ignoring the facts? I suppose it depends on how eager the reader is to get some enjoyment out of the tale you have to tell.

Writing in Biographia Literaria in 1817, Coleridge spoke of “a semblance of truth sufficient to procure for these shadows of imagination that willing suspension of disbelief for the moment.”

So it would seem the reader’s imagination is the key element. Is it sufficient to accept the ideas we want to get across? I got to thinking about this after writing a post for my current Blog Book Tour (in it’s second day at Joanna Campbell Slan’s blog). I mentioned in writing a discussion of setting that I keep my descriptions short, giving only enough to paint a picture sufficiently vivid that it should stir the reader’s imagination to fill in the rest.

It takes a good imagination to dream up all the stuff we writers put on paper. Am I being too generous with my readers’ ability to imagine the wealth of possible details my stories concern? I dunno. My first editor cautioned me about over-explaining. Don’t underestimate your readers, he said. They know a lot more than you think they do.

Coleridge implied that the shadows of truth we offer through our artful creations provide enough moments of escape from their normal lives that our readers are willing to suspend their disbelief long enough to enjoy the tale. An interesting new take on this appears in an article at Magellan’s Log by Douglas Milburn. He points out that what we used to consider simple truths are seriously in question now, thanks to such things as quantum physics.

Milburn says one prominent figure recently put it this way: If objectivity is dead, then there’s no longer any question of who’s right; all that matters is who’s interesting. You can read the entire article here.

For now, anyway, I think writers will have to depend on the readers’ imaginations to get us through that quagmire of willing suspension of disbelief. All the while working to finesse the facts as best we can. I suppose paranormal writers have it the best. If people are willing to accept vampires, what would they not believe?
Posted by Chester Campbell at 12:01 AM

Very true - the reader must use their imagination as well.
Ironically, most people tell me "I could never write a book - I have no imagination!"

Good point, Diane. Most people don't realize they use their imaginations all the time. The difference with writers is we channel it onto the page.

I loved this post--thank you! I have used this phrase so many times with no awareness of where it originated. I think I may suspend disbelief somewhat *too* readily as plot peeves that concern most other readers frequently sail right past me, but at least I now know I am doing so at Coleridge's behest!

Well said, Jenny. I'm in the same boat as you. If the story is exciting and I get swept up in the action, I don't pay too much attention to how closely the author is sticking with the facts. That said, I just can't get excited about werewolves and vampires and all that supernatural stuff.

Well said, Helen. I like to read authors who can say a lot in a few picturesque words.