A nice place for a few murders... 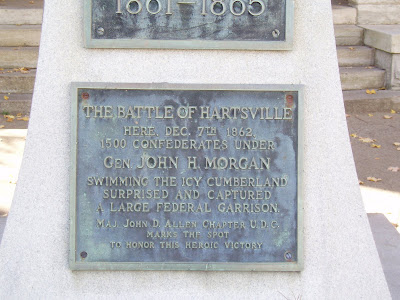 I’m giving a talk Saturday to the Trousdale County Historical Society in Hartsville, TN, the location of a lot of the action in my last Greg McKenzie mystery, The Marathon Murders. I visited the area several times while doing research for the book. It’s an interesting place.

But guess what? A few years ago, Hartsville and Trousdale County instituted a metropolitan form of government. I learned that when I saw a patrol car marked Metro Sheriff Hartsville/Trousdale Co. It’s probably the smallest county nationwide with a consolidated government, although the smallest in population goes to Lynchburg/Moore County, TN, home of the Jack Daniel Distillery.

I was intrigued by the old red brick courthouse built after the previous one burned in 1904. The well-worn stairs still have the original wooden steps. None of the interior appears to have been modernized. There’s a mark high on the wall with a sign identifying it as the high water mark from the famous 1927 flood that took the Cumberland River far from its banks nearly a mile away.

I tracked down another interesting bit of history after reading the inscription on a weathered plaque attached to the tall shaft of stone standing in front of the courthouse. You see it displayed above. Driving out of town toward a spot I had already picked for one of the murders, I noticed a sign pointing to the Battle of Hartsville Park.

There I found displays showing the locations and how the battle unfolded. And I found this marker, which I quoted in the book:

“After marching 24 miles in four inches of snow and crossing the icy Cumberland River, Colonel John Hunt Morgan and 1,300 men attacked the Federal 39th Brigade under the command of Colonel Absalom B. Moore. Although greatly outnumbered, Morgan succeeded in capturing 1,800 prisoners and recrossing the Cumberland before Federal reinforcements arrived from Castalian Springs. Federal losses were 2,096 while Confederate losses totaled 139.”

My murder took place around where the Confederate artillery was emplaced on the other side of the river. Those famed Confederate cavalry commanders, Morgan and Nathan Bedford Forrest, were something else.

I’ve always been a history buff, and things like this really get my corpuscles pumping. The only problem is, I tend to get carried away and spend a lot more time that I should. You can read more about The Marathon Murders by clicking this link.
Posted by Chester Campbell at 12:44 PM

Tennessee must just be full of history! My friend, author p.m. terrell, traveled the area as well doing research for her book, "Songbirds Are Free", which follows her ancestor, Mary Neely.

Wishing you great success this Saturday!

Thanks, Diane. The first book I had published was a 150-year history of my church. That required a lot of research but was fun to write.

Are you going to use your new historical information in a new novel do you think?

Hi, Brooke. Do you mean the research I did for the church history? Since it has a lot of Madison background, I may use some in my Sid Chance series. He lives in Madison.

This is neat! I've always found history buffs to the coolest people.

It's uncanny how these old courthouse steps show the wear of 100 years or more. Thanks for reminding us. A lot of stories there...
I enjoy reading about your process -- it is the sense of discovery and making connections that keeps me going, too.
Lucia
http://bluestemwriters.wordpress.com/

It's great that you're following where your heart leads you. Have fun!

I guess I've always enjoyed the research as much as the writiing.

I like the way you travel and dig into history to take your writing into places of the heart and back it up with facts.

Hope your talk goes well. Sounds like you have some interesting things to share, and I hope it garners much interest in your book.