And you thought the election was over 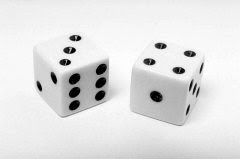 Well, this isn't exactly about an election. Maybe it's more like a roll of the dice, but it is about voting. There's a website called Preditors and Editors, which you may have heard of in relation to checking on a scamming agent or a less than savory publisher. It seems that P and E also has something called the Preditors and Editors Readers Poll, which it conducts each year between Jan. 1 and Jan. 14. Mystery Novels is one category, and the winner receives a GIF (that's .gif for the computer savvy) announcing it as the best in 2008.

Okay, it's just another thingy to put on the website beside your book, attesting that it got noticed by several somebodies. You'll note it's called a Readers Poll, which would give the impression that people who vote for a book have read it. Would that it were so. Realistically, it's a popularity contest.

I would love for you to read The Marathon Murders before you vote for it. The next best thing would be to read the first two chapters through this link to my website. But if you can't do that, I'll still take your vote.

They even give prizes to random voters in the poll, so you might be a winner, too.

Time to get down to the nitty gritty. Here's the link to the voting site: P and E Readers Poll-Mystery Books. Scroll down and click on the circle beside The Marathon Murders, continue down to give your name and email address, then click on Submit data. I'm assured that there are no exit polls, so you won't be bothered on leaving the premises.

Sorry I don't have any "I Voted" stickers to pass out, but you can sit down, enjoy a cup of coffee, and feel good that you've done your civic duty.

Gad, I hope there are no hanging chads in this deal.
Posted by Chester Campbell at 12:01 AM

Good luck! Holding all fingers and toes for you.

I've received several emails asking me to vote for different categories in the Preditors and Editors poll. I didn't know you could add a link to your blog.

I hadn't heard of this before! Thanks!

They're supposed to show weekly voting records, so I presume something will be up after today, since this is the end of the first week.

Good info on the P&E poll. My book Cowgirl Dreams is up too. Don't know what it all means, but we shall see!

Best wishes, and good use of your blog with this post to promote yourself.

Good luck with this. I'll check out P & E also. Great description of your Nashville based books. Lucia

Thanks, guys, this Pred Poll is an interesting exercise. We'll see what happens.

I like your cover, Chester. Good luck with the poll.

Thanks, Bob. I've had lots of good comments on the cover. It really fits in with the story.

Good luck in the poll, Chester!

Love your sense of humor!